This hike follows the 4.6-mile-long Catfish Loop Trail, which loops around the southwest corner of Fahnestock State Park. 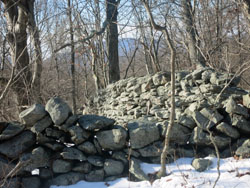 The Catfish Loop Trail immediately crosses a stone wall. You’ll observe many stone walls – which indicate that the area was once used for agricultural purposes – along the hike. In a quarter mile, the trail turns sharply right and crosses a stream. After crossing another stream, the trail begins a steady climb. At the crest of the rise, it passes through a mountain laurel thicket. The trail then descends to cross yet another stream, and it follows the park boundary for some distance. Soon, it reaches the highest point on this section of the ridge.

After a relatively level stretch, the Catfish Loop Trail crosses the white-blazed A.T. (this junction is marked by a cairn). The trail now proceeds through mountain laurel thickets and soon begins a steady descent to cross a woods road (blazed yellow as a horse trail). It continues to descend and, in a short distance, crosses a stream on rocks.

The trail now climbs gradually to the most interesting point on the hike, where it goes through a narrow 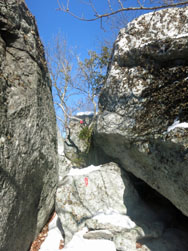 passage between large lichen-covered boulders. From the top of the boulders, there is a panoramic west-facing view, with Crows Nest and Storm King Mountains visible on the west side of the Hudson River. You’ve now hiked for nearly two miles, and this attractive spot Is a good place to take a break.

After crossing a small stream, the trail climbs to a ridge overlooking a valley on the left. It descends a little to cross a wider stream, then goes through a gap in a stone wall and climbs again to a rock outcrop that overlooks the valley. You’ll notice an abundance of rock walls near the trail in this area, and it is hard to believe that this land that appears so inhospitable to settlement was once devoted to agricultural pursuits. In leaf-off season, there are several limited west-facing viewpoints along this section of the trail, with the West Hudson Highlands visible in the distance. Soon, the trail begins to parallel a stone wall on the left, which marks the park boundary. After a while, the blazes bear right, away from the wall. A short distance beyond, the trail crosses a stream and continues through dense mountain laurel thickets. It climbs gradually to a rock outcrop from which Duck Pond is visible through the trees to the left. Just north of this outcrop, the trail makes a very sharp bend and nearly doubles back on itself, heading south and then east. Soon, it reaches a large rock outcrop with a view of the valley below to the left.

From the outcrop, the Catfish Loop Trail descends steeply to the valley below, where it crosses a wide stream on rocks. After going over a minor rise, the trail begins a steep, steady climb of about 150 vertical feet. Upon reaching the crest of the ridge, the trail goes down a little, regains the lost altitude and levels off, heading north along the west side of the ridge.

After bending to the right, the Catfish Loop Trail crosses a yellow-blazed woods road – the same horse trail that you crossed earlier in the hike. The trail now climbs briefly to a rock outcrop, descends steadily through the woods, and climbs once more to reach a junction with the white-blazed Appalachian Trail – completing the loop. Follow the Appalachian Trail uphill to Dennytown Road and the parking area where the hike began. This loop hike traverses a remote area of the park, reaching an interesting rock formation with broad west-facing views and passing many old stone walls.

This hike follows the 4.6-mile-long Catfish Loop Trail, which loops around the southwest corner of Fahnestock State Park.

On the west side of Dennytown Road, across from and just south of the parking area, you will see a sign for the Catfish Loop Trail. Head west into the woods on the white-blazed Appalachian Trail. In a short distance, you’ll reach an intersection with the red-blazed...

From the east end of the Bear Mountain Bridge, proceed north on N.Y. Route 9D for 8.0 miles to Peekskill Road at the southern end of Cold Spring (just beyond the Boscobel Restoration). Turn right and follow Peekskill Road for 0.5 mile to its terminus at a junction with N.Y. Route 301, then turn right and follow Route 301 for 4.5 miles to its intersection with Dennytown Road. Turn right onto Dennytown Road and continue for 1.2 miles to a large dirt parking area on the left side of the road (this is the second parking area along the road).

rate experience
September 19, 2016
0
Parking Lot
<p>The directions/notes for the hike should read that after your turn onto Dennytown Road, continue until you reach the second dirt parking on the left, the one with the large kiosk. :) I went in that first one also and then kind of figured it was not the right one.&nbsp;</p>
missmoon
June 22, 2016
0
Peaceful hike!
<p>Did this hike on Monday and it was peaceful and easy to follow. Can't say anything bad about this hike!</p> <p>When you get to Dennytown Rd, don't turn into the first parking lot like I did. Go down the road a bit and you will then be at the correct parking area.</p>
Laurie
October 18, 2015
0
Excellent Thought Clearing Hike
<p>I've done many hikes, but this one was one of the most peaceful that I have done in a while. &nbsp;There is practically no chance of loosing your place on this trail, just follow the red blazes start to finish. &nbsp; It really does wonders for just letting go and enjoying the hike without having to worry whether you missed a blaze or if you where supposed to switch trails.</p> <p>&nbsp;</p> <p>The fall foliage is amazing and the addded snow shower in the middle of the hike made it that much better. &nbsp;I would definitely reccomend this hike for anyone who wants to experience peace and quiet, is a first time hiker(the terrain is easy, just a few moderate parts) or just wants to tone it down from all those strenous hikes this season.</p>
lorddmnfyre
More Reviews
Log in or register to post comments