From the cul-de-sac, walk back on Johnsontown Road for about 100 feet, crossing a bridge over a stream. Just west of the bridge, you will see three blue-on-white blazes on a tree, which mark the start of the Blue Disc Trail. Turn right and follow this trail up a paved road, passing a huge boulder on the left and crossing the route of a gas pipeline.

Soon, you’ll notice on the right a pumping station for the pipeline. Here, the Blue Disc Trail bears left onto a footpath and begins to climb parallel to the pipeline. Soon, it turns left onto a woods road. Then, in another 0.3 mile, the Blue Disc Trail bears right at a fork and continues along a narrower woods road. The white-blazed Kakiat Trail joins for a short distance, but you should continue to follow the blue-on-white blazes.

The Blue Disc Trail now begins a steep climb along the woods road. About halfway up, it turns right, crosses a stream, and climbs even more steeply over rocks. Finally, 0.9 mile from the start, the trail reaches the top of Almost Perpendicular – a dramatic viewpoint from the top of a cliff. You can see Seven Lakes Drive directly below, with the Ramapo Mountains in the background.

You'll want to rest here from your steep climb. When you're ready to continue, bear left and follow the blue-on-white trail northward. After a slight descent, the trail climbs steeply up Pound Mountain and continues along the summit ridge. It crosses the route of another gas pipeline and soon begins to descend.

At the base of the descent, the trail crosses a woods road and a stream, and it begins to run along the foot of a rock ledge. At one point, the trail is blazed through a narrow passage between rocks known as the "Elbow Brush." (This passage can easily be bypassed to the left.) Just beyond, the trail passes by a large overhanging rock and skirts to the right of a narrow rock crevice, paralleling a stream to the left.

The Blue Disc Trail passes to the right of a swamp and climbs to intersect the red-dash-on-white-blazed Tuxedo-Mt. Ivy Trail. Continue ahead, still following the blue-on-white blazes, and you'll soon reach the top of another dramatic cliff - Claudius Smith Rock. Claudius Smith, after whom this rock formation is named, was a thief who was reputed to have used the caves at its base as a hideout during the Revolutionary War. He was captured by an officer of the Continental Army and hanged at the jail in Goshen in 1779. The view from the top of Claudius Smith Rock extends west to the village of Tuxedo. You've now hiked for two miles, and this is another fine place to stop and take a break.

After taking in the view, retrace your steps to the junction with the Tuxedo-Mt. Ivy Trail, and turn left, following the red-dash-on-white blazes. The trail descends gradually, making a horseshoe turn at the base of the descent to skirt a swamp to the left of the trail. It then climbs over a low ridge and descends through a rocky area to cross Spring Brook and reach a junction with the White Bar Trail, which comes in from the left.

After descending through laurel, the White Bar Trail turns right just before reaching Seven Lakes Drive. Take care to follow the horizontal white blazes, which briefly join several woods roads. After proceeding along a narrow woods road, the White Bar Trail again comes near Seven Lakes Drive. Here, the trail bears right and joins the Old Johnsontown Road - once an extension of the paved road on which you drove to the trailhead, but abandoned in 1962 when the parallel Seven Lakes Drive was completed. You'll soon notice a stone wall on the left -- a remnant of a former farm. The Kakiat Trail, also blazed white, crosses, but you should continue along the dirt road, following the horizontal white blazes of the White Bar Trail. In half a mile, you'll reach the cul-de-sac where you began the hike. 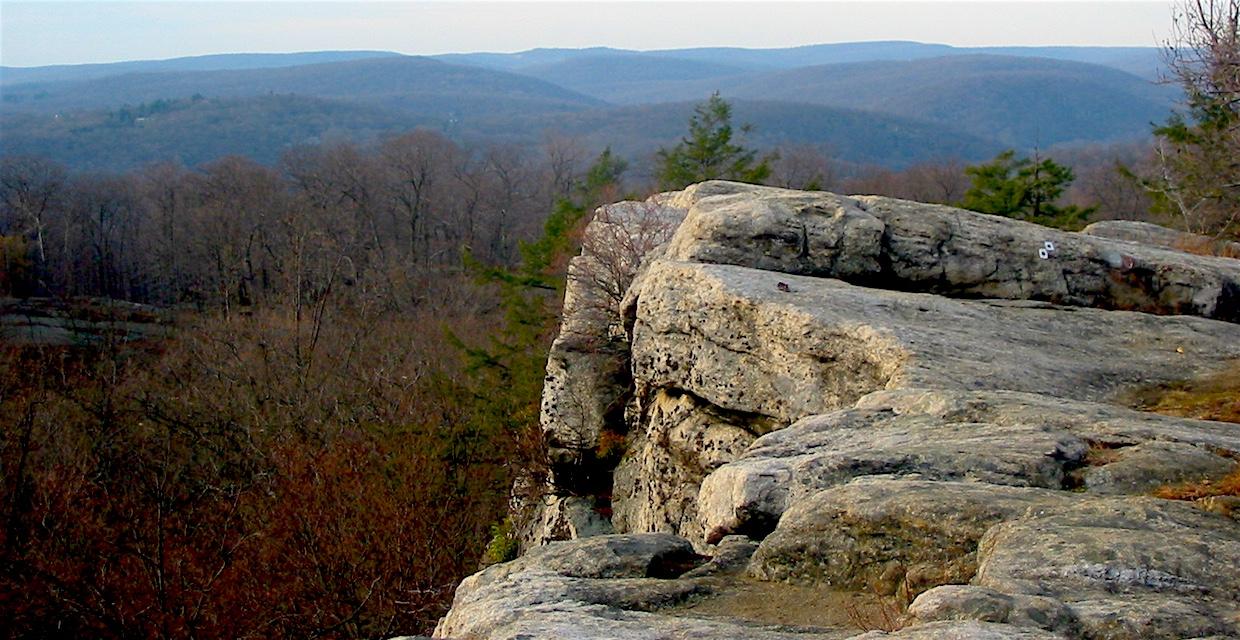 From the cul-de-sac, walk back on Johnsontown Road for about 100 feet, crossing a bridge over a stream. Just west of the bridge, you will see three blue-on-white blazes on a tree, which mark the start of the Blue Disc Trail. Turn right and follow this trail up a paved road, passing a huge boulder on the left and crossing the route of a gas pipeline.

Soon, you’ll notice on the right a...

Take N.J. Route 17 north to the New York State Thruway and take the first exit, Exit 15A (Sloatsburg). Turn left at the bottom of the ramp onto N.Y. Route 17 north, and continue through the Village of Sloatsburg. Just past the village, turn right at the traffic light, following the sign for Harriman State Park. Cross an overpass over railroad tracks and continue along Seven Lakes Drive for 0.7 mile, passing under the Thruway overpass. Just before a sign indicates that you are entering Harriman State Park, turn left, then immediately turn right onto Johnsontown Road. Proceed for 1.2 miles to the end of the road and park at the cul-de-sac.

Take Metro-North's Port Jervis Line to the Sloatsburg station. From the station, proceed north to Seven Lakes Drive, then turn right and follow driving directions above. There is a two-mile roadwalk from the station to the trailhead.

rate experience
November 13, 2018
0
In what respect were my directions unclear?
<p>You quote a fairly long excerpt from my description and say that it is unclear and that "the directions could be better."&nbsp; Could you advise in what respect you consider the directions unclear, and how they could be improved?&nbsp; You indicate that you must have made a wrong turn because you hiked 8.1 miles, but you don't say where you made a wrong turn.&nbsp; If my directions are incorrect or unclear, I want to correct or improve them, but you haven't indicated in any way what the problem is.</p> <p>&nbsp; &nbsp; &nbsp; &nbsp; &nbsp; Daniel Chazin</p>
Daniel Chazin
November 12, 2018
3
8.1 miles?
So I would agree with one post above that the first part of the hike is bar far the best. The cliffs and rock formations are awesome and the kids really liked that. I am pretty certain we took a wrong turn because we hiked 8.1 miles! I think here is where the directions became unclear: "It then climbs over a low ridge and descends through a rocky area to cross Spring Brook and reach a junction with the White Bar Trail, which comes in from the left. Continue ahead on a woods road, now following both the red-dash-on-white blazes of the Tuxedo-Mt. Ivy Trail and the horizontal white blazes of the White Bar Trail. After passing a marsh to the right, the Tuxedo-Mt. Ivy Trail leaves to the left, but you should continue ahead along the woods road, following the White Bar Trail. After descending through laurel, the White Bar Trail turns right just before reaching Seven Lakes Drive. Take care to follow the horizontal white blazes, which briefly join several woods roads. After proceeding along a narrow woods road, the White Bar Trail again comes near Seven Lakes Drive. Here, the trail bears right and joins the Old Johnsontown Road" I would do the trail again and maybe it was just us but the directions could be better. Also, because of all the rain we've had recently it was a muddy mess so bring your boots! :)
V_Cioni
September 12, 2018
4
Fun rock formations!
A pretty hike with great views and lots of really interesting rock formations along the way!
justalizmartin
More Reviews
Log in or register to post comments