This hike features the Long Path over Romer Mountain, Mt. Pleasant and Cross Mountain – one of the most magnificent stretches of trail in the Catskills. It was built to a very high standard in 2013-14 by a dedicated team of volunteers, with sidehilling and rock steps. It may well represent the most outstanding trail construction achievement by volunteers in the history of the Trail Conference!

The hike is a strenuous one. Besides the overall distance of the hike (12 miles), it involves a gain in elevation of about 3,300 feet. However, most of the grades are moderate, and (except at the end, where you proceed downhill on an older trail) there are only a few steep sections 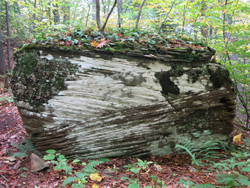 From the parking area, head into the woods on a blue-blazed trail, which climbs Romer Mountain on switchbacks, crossing several streams along the way. After climbing about 1,100 vertical feet, you’ll approach the crest of Romer Mountain. The trail passes an interesting boulder, with striations in different directions, and goes under an overhanging rock in a narrow passage. Soon, after climbing a little more, the trail reaches the crest of the mountain, with some west-facing views through the trees.

After a relatively level stretch, the trail resumes its climb to the summit of Romer Mountain (2,240 feet). There are no views from the summit, but after descending a little, you’ll come to a viewpoint about 25 feet to the left of the trail. Tremper Mountain is visible to the northeast, and the Emerson Resort along Route 28 can be seen directly below. You’ve hiked about 3.5 miles to reach this point, and this is a good place to take a short break.

The trail now resumes a moderate ascent towards the crest of Mt. Pleasant, soon passing through a hemlock forest. In about a mile, after following along the edge of an escarpment, you’ll come to a limited viewpoint over Wittenberg Mountain to the southwest. Then, after climbing a little more and crossing to the east side of the ridge, you’ll reach a limited viewpoint over the eastern half of the Devil’s Path (Indian Head, Twin and Sugarloaf Mountains). 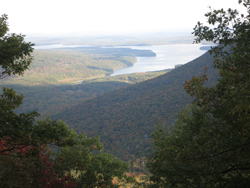 The Long Path now heads due south on a level footpath along the western shoulder of Mt. Pleasant, soon reaching a panoramic viewpoint over Wittenberg Mountain. This is the first unobstructed view on the hike, and you’ll want to spend some time here to take in the spectacular view.

The trail continues ahead, with some minor ups and downs, and soon resumes a gradual climb of Cross Mountain, with one rather steep section. In about a mile and a half, as the trail turns right, there is a panoramic viewpoint on the left over the Ashokan Reservoir. A short distance beyond, an unmarked trail on the left leads to another viewpoint. The view of the reservoir from here is more limited, but you can also see Ashokan High Point to the right. 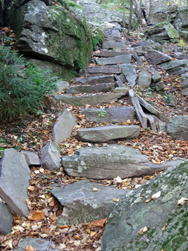 For the next mile, the trail continues on a relatively level route. It then begins a steady ascent towards the southeast arm of Wittenberg Mountain, steeply in places. Along the way, you’ll climb the Grand Staircase – a long series of rock steps along the side of a cliff, constructed by the volunteers who built the trail.

After climbing about 250 vertical feet, you’ll emerge on open rock ledges, with panoramic views in three directions. To the west, Wittenberg Mountain towers above you, and there are also spectacular views to the north and east. These rock ledges are reminiscent of those found in the Adirondacks and in Maine, and they are a very special feature of this hike. You’ll want to rest from the climb and savor the views from this delightful spot.

The trail proceeds ahead and resumes its climb, soon reaching the highest elevation of the hike (2,770 feet) on the southeast arm of Wittenberg Mountain. The trail continues on a relatively level route, but the route becomes rockier. You’ll cross several streams along the way.

In another mile, the blue-blazed trail ends at a junction with the red-blazed Wittenberg-Cornell-Slide Trail. Turn right and follow this red-blazed trail, which will lead you down to Woodland Valley in 2.6 miles. In 0.2 mile, you should bear left at a junction with a yellow-blazed trail which heads to a lean-to. The Wittenberg-Cornell-Slide Trail is much rockier than the blue-blazed trail that you followed from Phoenicia, and the descent is quite steep in places. The trail can be quite wet, especially after heavy rains, so use caution, especially on the steep downhill sections.

At the base of the descent, the trail crosses a footbridge over Woodland Creek. Just ahead, you’ll come to a campground road. Bear right, and you’ll soon reach Woodland Valley Road. Turn left, and the day use parking area where you left the first car is just ahead on the right. This one-way hike over Romer Mountain, Mt. Pleasant and Cross Mountain offers spectacular views of a number of Catskill peaks.

This hike features the Long Path over Romer Mountain, Mt. Pleasant and Cross Mountain – one of the most magnificent stretches of trail in the Catskills. It was built to a very high standard in 2013-14 by a dedicated team of volunteers, with sidehilling and rock steps. It may well represent the most outstanding trail construction achievement by volunteers in the...

This one-way hike requires two cars. Take the New York State Thruway to Exit 19 (Kingston) and proceed west on Route 28 (following the signs to "Pine Hill"). Continue along Route 28 for about 23 miles. Just beyond the village of Phoenicia, turn left at a sign for Woodland Valley. After crossing the bridge over Woodland Creek, turn right and follow Woodland Valley Road for about five miles to the Woodland Valley State Campground. Park the first car in the day use parking area on the right (when the campground is open, from May 15th to Columbus Day weekend, there is a $6 parking fee).

With the second car, drive back on Woodland Valley Road. After passing the bridge over Woodland Creek (do not cross the bridge), the name of the road changes to High Street. Continue for 0.5 mile and turn right onto Lane Street. Proceed to the end of the street and turn right (uphill) to the DEC parking area.