This loop hike in the southeastern section of the park follows woods roads for most of the way, passing by four of the six special "rock" features: Indian Rock Shelter, Raven Rocks, Dancing Rock and Bear Rock Petroglyph.

From the circle at the end of the road, bear right and follow a road blocked by a gate. Just beyond, you’ll pass a kiosk on the right and come to a fork at junction #70. Bear left onto a woods road with red and yellow blazes, but at the next fork (junction #24) bear right, now following only the Yellow Trail. 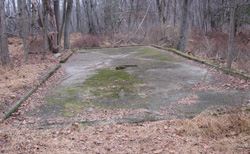 Before reaching the crest of the rise, you’ll notice a kiosk on the left (junction #23). Turn left and follow a white-blazed trail, which goes through the site of a Civilian Conservation Corps camp (Camp Merkel) from the 1930s. You’ll follow an old concrete sidewalk and pass an old stone water fountain on the left. When the white-blazed trail ends at a kiosk, descend stone steps and turn right onto a woods oad – the route of the Yellow and Red Trails.

At the next junction (#19), bear right, leaving the woods road (and the Red and Yellow Trails), and continue to follow the Rocks Trail, which descends on a footpath. After crossing two footbridges and passing cliffs on the right, the Rocks Tral reaches the Indian Rock Shelter, frequented by Native Americans because the overhanging rocks offered protection from the rain.

After taking in the view, turn right (when facing the view) and head southwest on the Rocks Trail (marked by "RT"-on-white blazes) until you reach junction #62, where a white-blazed trail begins on the right. Turn right onto the white-blazed trail and, in a short distance (at junction #61), turn left onto the Red Trail, which begins to descend. Bear right at junction #47 and continue to follow the Red Trail, which descends gradually, passing through a valley. 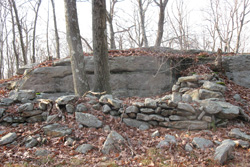 When you reach junction #36, follow the Red Trail as it turns left, but just ahead (at a fork) bear left onto the Rocks Trail. At the next junction (#37), turn left and follow a white-blazed trail up to Dancing Rock – a flat rock where farmers used to dance to celebrate the completion of the harvest. Continue ahead on the white-blazed trail, which passes stone ruins, then loops around and descends to end at another junction with the Rocks Trail (junction #60).

Turn left onto the Rocks Trail, which goes under power lines and descends to the Bear Rock Petroglyph (on the right) – a rock carving attributed to Native Americans in the shape of a bear. At the next junction (#39), turn right onto a white-blazed trail, which recrosses under the power lines and ends at junction #38, where you turn left onto the Green and Red Trails.

Continue ahead at junction #34, but at the next junction (#32), turn right onto a white-blazed trail that crosses a footbridge over a stream and climbs to pass through a gap in a stone wall at the crest of a rise. After descending, turn right at junction #25, rejoining the Green and Red Trails, and follow these trails back to the circle at the parking area where the hike began. This loop hike passes various features of interest and reaches an expansive viewpoint.

This loop hike in the southeastern section of the park follows woods roads for most of the way, passing by four of the six special "rock" features: Indian Rock Shelter, Raven Rocks, Dancing Rock and Bear Rock Petroglyph.

From the circle at the end of the road, bear right and follow a road blocked by a gate. Just beyond, you’ll pass a kiosk on the right and come to a fork at junction #...