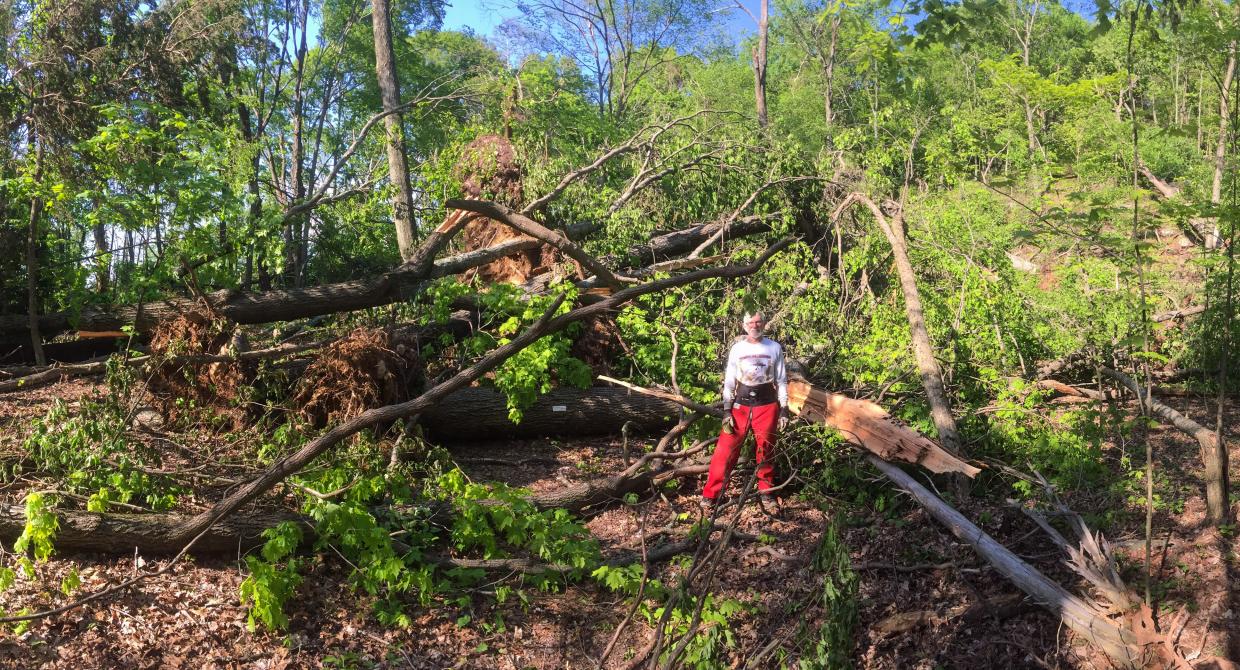 The Trail Tramps Crew is working hard to clear and repair trails temporarily closed or damaged by several remarkably strong storms that hit our parks this spring.

On May 21, Trail Tramps Crew member Dave Margulis and I determined that approximately a half-mile of the Sugarloaf Trail in the Castle Rock Unique Area of the Hudson Highlands was essentially impassable. On May 28, B sawyers Andrew Seirup, Walt Daniels, Fred Stern, and Bryan Blackburn were joined by A sawyer Paul Bisset to assess the damage. Trail Tramps Dave Margulis, Connie Stern, Marilyn Blaho, and Martha Rabson joined Pat Bisset and Bruce Lucas as swampers. I led, literally, since it was up to me to actually find the trail. (I hate to admit that I actually lost it in one spot and we ended up clearing one tree from a private road.)

Bryan and I started at 7:30 a.m. and were joined by the rest of the crew at 9 a.m. Five crew, includng two sawyers, finished the clearance at 4 p.m. Just as the five of us were tackling the final section of blowdowns, a pair of hikers caught up with us. I advised them that they could not pass and pointed to their goal, Sugarloaf, dead uphill to the south. They opted to bushwhack (against advice) after commenting, “the thunderstorm did this?” We had just finished clearing the trail when they returned, grateful they did not have to retrace their off-trail route up.

The penultimate mess removed from the trail consisted of more than five intertwined trees, ranging in size from about 8 inches to 20 inches, including one massive root ball. This is how we classify our blowdowns:

Sawyer Bryan Blackburn kept a tally of the blowdown he and his fellow volunteers tackled on the Sugarloaf Trail in just one day, from 9 a.m. to 5 p.m.:

WHAT WE DON’T KNOW:

WHAT WE ARE PROFOUNDLY GRATEFUL FOR:

The Trail Conference trains select volunteers in the safe and responsible removal of blowdown requiring chainsaws in accordance with the United States Forest Service Saw Policy. When you hear our volunteers talking about their sawyer certification level or swampers, here’s what they mean:

A-Level Sawyer: An apprentice sawyer who can saw only under the immediate supervision of a B-level sawyer.

B-Level Sawyer: An intermediate sawyer who may independently saw (with the assistance of a swamper) in moderately complex situations.

Swamper: A worker who assists sawyers by clearing away cut tree sections and clears brush, limbs, and small trees. A swamper remains alert for dangerous situations and may also carry supplies.