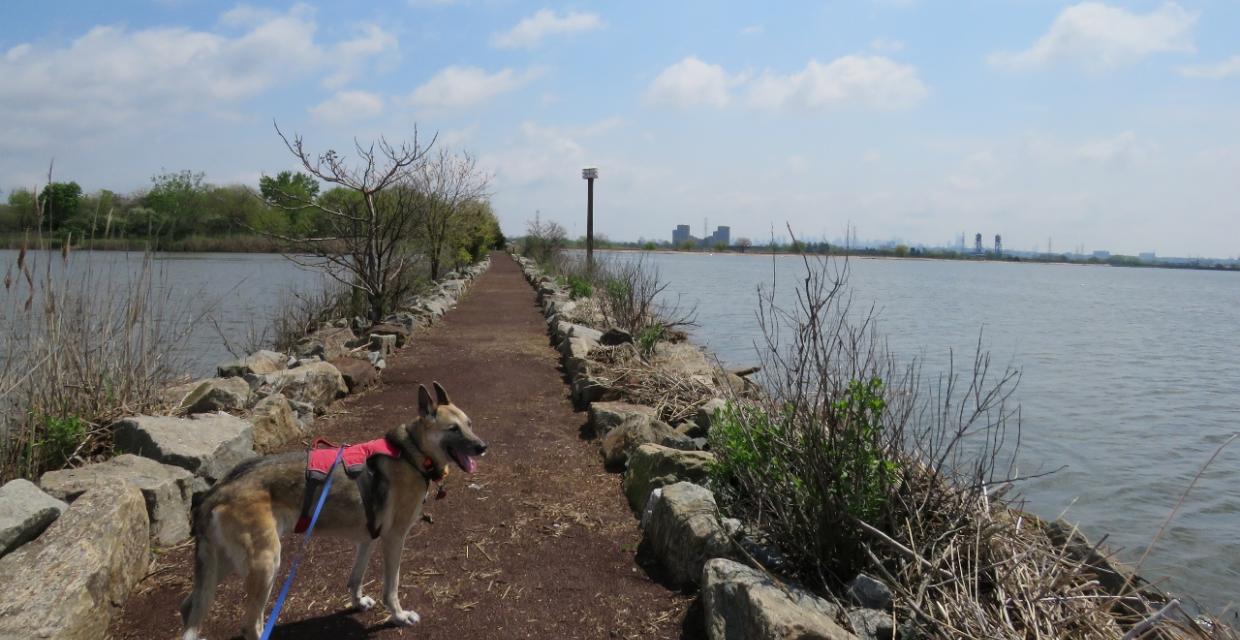 Do not tell late night TV comedic NJ bashers about this park which has an “overlook trail” built on a former garbage dump -- but it is beautiful and no longer an island.

Geologically, the Hackensack Meadowlands (now called the New Jersey Meadowlands) are part of the Mesozoic Lowland area between the Watchungs and the Palisades. Very different from the rugged Watchungs to their west, they feature a small network of trails that offer the opportunity to explore a wetland teeming with wildlife.

Although the area is often thought of as a landfill, a visit to the Meadowlands is definitely not a trip to the dump.  The 640-acre Richard W. DeKorte Park features a landscaped capped landfill and trails that take visitors out into wildlife observation areas and bird blinds.  It also includes the Meadowlands Environment Center, which contains informative exhibits on the Meadowlands and its ecology.  Adjacent to the park, and reachable from it, is the 3.5-acre Lyndhurst Nature Reserve -- which was once an illegally filled garbage island (GPS Coordinates: 40.784740, -74.106573).

Six short trails (0.25 to 1.25 miles) are accessible from the Meadowlands Environment Center at DeKorte Park.

The Kingsland Overlook Trail climbs an artificial mound created by a landfill for household waste - walking along this beautifully landscaped trail it is hard to imagine that it was once the site of a garbage dump.

The Marsh Discovery Trail, a half-mile-long boardwalk through the brackish marsh, has excellent views of the city skyline. The accessible trail connects a series of islands along the former Kingsland Creek and it is a great spot for bird watching.

The Meadowlands Nature Blog offers up-to-date information and commentary about scheduled events and, especially, birds in the area.

Use the Web Map link on this site for a brochure and trail map.

Do not tell late night TV comedic NJ bashers about this park which has an “overlook trail” built on a former garbage dump -- but it is beautiful and no longer an island.

Geologically, the Hackensack Meadowlands (now called the New Jersey Meadowlands) are part of the Mesozoic Lowland area between the Watchungs and the Palisades. Very different from the rugged Watchungs to their west, they feature a small network of trails that offer the opportunity to explore a wetland teeming with wildlife.

Although the area is often thought of as a landfill, a visit...

WHAT: "Quintessential Meadowlands, "a landscape and nature photo exhibit by Marco van Brabant.
Marco van Brabant of Hackensack at Richard W. DeKorte Park, where wetlands contrast with city skyline: 'It's a hidden gem.'

"At dusk one evening in January, Marco van Brabant was snapping photos of the Meadowlands marshlands with his son when the ice beneath his feet cracked and he fell into its chilly waters.

An avid landscape photographer, van Brabant has such affection for the 110 acres of protected wetlands of Richard W. DeKorte Park in Lyndhurst, plunging into its tidal waters was a positive experience.

"I had water up to my chest and I was like, 'I love this place. I'm now a part of the Meadowlands,' " said van Brabant, whose born name is Marco Lips. He chose the surname to pay homage to Brabant, the province in The Netherlands where he grew up. His Nikon D300 camera was spared that day because he held it above his head on its tripod.

Starting on Tuesday, his nature photos will be exhibited at the Flyway Gallery inside the park, in an exhibit titled "Quintessential Meadowlands."

Van Brabant's fascination with these urban marshes comes from seeing beauty in contrasts."

For the rest of the story see The Record.