This section of the Long Path contains some of the most spectacular and rugged scenery in the Catskills. From Silver Hollow Notch the trail ascends a shoulder of Plateau Mt. Passing several viewpoints before reaching the Devil's Path on the ridge of Plateau Mt. From here it follows the Devil's Path east over Plateau's summit, Sugarloaf, Twin and Indian Head Mountains. This trail ascends and descends in dramatic fashion, clambering over and through large rock ledges. Each mountain offers excellent views. The Devil's Path is the most dramatic trail in the Catskills, going up and over six major peaks. The Long Path traverses the four eastern peaks. As its name implies, there are tremendous drop-offs between the peaks. The hike of the entire Devil's Path (west to east) involves a gain of over 8,000 feet in total elevation, an elevation gain comparable to that of the Great Range in the Adirondacks!

0.45 Turn hard left at switchback. Yellow trail leads 75 yards right to a view over the Warners Creek Valley and the slopes of Edgewood Mt.

0.64 After scrambling over some boulders and up a ledge, view from top of ledge south to Belleayre Mt. and beyond.

0.91 Trail turns hard left where yellow side trail branches right to a grassy view towards Olderbark Mt. across Warners Creek Valley. Grade eases shortly beyond this side trail before beginning a pleasant walk thru the thick spruce fir high elevation forest across Daley Ridge. 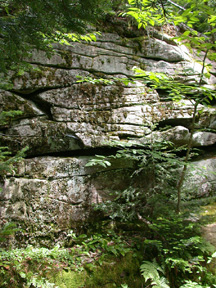 2.69 After a short scramble a yellow marked side trail leads 10 yards to a sweeping view south over Daley Ridge and Stony Clove Valley.

2.93 Junction with red marked Devil's Path. Turn right. Unmarked trail opposite is a private trail, keep out. The next mile is a pleasant walk along the more or less flat summit ridge of Plateau thru a majestic old growth spruce fir forest.

3.43 Cross the summit of Plateau Mt. In dense spruce woods.

5.33 Junction with the northern leg of the Mink Hollow Trail. Left on blue markers leads 2.25 miles to a junction with the Pecoy Notch Trail and 0.25 miles further, Roaring Brook parking area. Continue ahead on red markers soon reaching the first of 5 rock ledges the trail climbs over ascending Sugarloaf.

5.68 The forest becomes primarily balsam fir and red spruce, with birch mixed in as the grade begins to moderate.

5.88 Pass the sign indicating the 3,500 foot elevation line. The forest now becomes more open with views to the left of the Blackhead Range to the north. The trail passes a large rock on the right with excellent views of Plateau Mt. across Mink Hollow.

6.08 A yellow marked side trail leads right to a rock ledge with an outstanding view of the southern Catskills. Visible are the Burroughs Range, Giant Ledge and Panther Mountain and mountains along the Pine Hill - West Branch Trail. Ashokan Reservoir can also be seen with the Shawangunks in the background. On a clear day, you can see all the way to the Hudson River Valley.

6.13 Reach the flat, level summit of Sugarloaf Mountain. The trail continues through a mature balsam-spruce forest, beginning to descend in a series of steps, alternating with level sections.

6.73 Reach a viewpoint to the east over Pecoy Notch, with Twin and Overlook Mountains visible beyond and the Ashokan Reservoir and Shawangunks in the distance to the right. The trail now begins a very steep descent into Pecoy Notch. 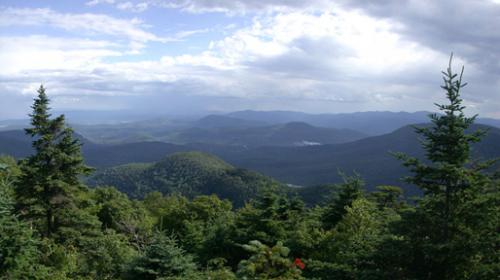 6.88 Descend steeply over a series of rock ledges. There are many good views over Pecoy Notch to Twin Mountain beyond.

7.33 Descent ends abruptly shortly before reaching a junction with the Pecoy Notch Trail in the col between Sugarloaf and Twin Mountains. Left on blue markers leads 1.75 miles to the north end of the Mink Hollow Trail and a quarter mile beyond, Roaring Kill Road. The Long Path continues, beginning a steep climb of the west summit of Twin Mountain and climbing over large rocks and several rock ledges in the process. There are several good views back towards Sugarloaf during the ascent.

7.53 Pass a huge rock on the left that separated from the main ledge.

7.68 The trail goes thru a narrow passage and climbs up a rock ledge.

7.88 Reach a rock ledge with a large overhanging rock, a good temporary shelter, on the left. The trail continues through a cleft in the rock ledge. At the top of the ledge, there is a good viewpoint of Sugarloaf Mountain with the fire tower on Hunter visible to the west, and the Blackhead Range, Stoppel Point and Roundtop visible to the north. The grade now moderates.

8.03 The trail turns left and climbs a small ledge to reach a viewpoint near the west or true summit of Twin Mountain. From this vantage point, one can see to the south, the Ashokan Reservoir and the Shawangunk Mountains to the southeast, with the Hudson Valley and the Hudson Highlands far in the distance. The actual summit of Twin is slightly beyond this viewpoint. The trail now descends thru a mature spruce-fir forest.

8.33 Reach the col between the two peaks of Twin. The trail now ascends gradually to the east peak of Twin.

8.68 Reach the east peak of Twin Mountain with an excellent 180 degree view. To the west, Sugarloaf and Plateau Mountains are visible, and to the south all the major peaks of the southern Catskills may be seen. On a very clear day, High Point, NJ with it's tall monument can be spotted. To the southeast, the Ashokan Reservoir and Shawangunks are visible with the Hudson Highlands and Hudson Valley in the distance. Overlook Mountain with it's firetower may be seen to the east, with the Hudson River and the Taconics in the far distance. This is one of the best views in the Catskills. The Catskill 3500 Club does not consider the east peak of Twin, while over 3,500 feet high, as a separate peak, since the drop between the west and east peaks of Twin is less then the required 200 feet. The trail continues eastward, beginning to descend.

8.78 Reach a viewpoint to the east over Jimmy Dolan Notch. The trail now begins to descend more steeply.

8.93 Descend over rock ledge and pass under a large balanced rock to the left.

9.08 The trail reaches Jimmy Dolan Notch, the col between Twin and Indian Head Mountains. This notch has the highest elevation (3,100') of all the col's along the Devil's Path. Here the blue marked Jimmy Dolan Notch Trail descends steeply at first then moderately north two miles to Prediger Road. Continue ahead following red markers to begin a moderate to steep ascent up Indian Head. 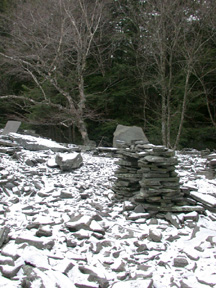 9.63 The ascent becomes more gentle as the trail reaches thick spruce woods after a steep scramble up the final ledge to the summit of Indian Head Mountain. This is the highest of the three summits making up the summit ridge.

10.08 Reach a spectacular overlook after going over the second summit. Below is the eastern summit with Plattekill Mountain beyond and Overlook Mountain to the right. Belopw and to the left is Platte Clove with Huckleberry Point prominent above the north side of the Clove. On the far horizon is Vermont to the north, Massachusetts to the northeast and Connecticut to the southeast. In between is the Hudson Valley from just south of Albany to the Highlands beyond Newburgh. A short but very steep descent brings one to the low point between the middle and east summits.

10.58 View to north with Kaaterskill High Peak and Round Top across the upper Schoharie Valley with the eastern Escarpment mountains and Black Dome Range beyond. Begin a steep to moderate descent. 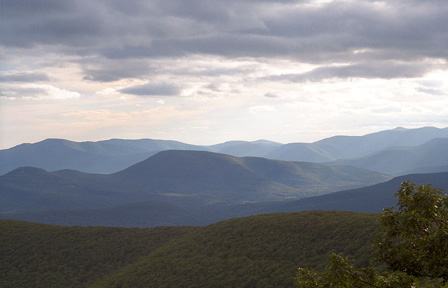 11.83 The Devil's Path meets the blue marked Overlook Trail coming in from the right on a wide woods road. Turn left on the road, continuing to follow red markers. Right on the Overlook Trail leads 0.15 miles to Devil's Kitchen Lean-to.

11.88 Reach another trail junction. The Long Path continues ahead on the old road now following blue markers while the Devil's Path turns left. There is a large bluestone quarry to the right.

12.13 Cross onto the Platte Clove Preserve. The blue markers now change to green diamonds Preserve markers. Camping is not permitted within the Preserve which runs from here to beyond Platte Clove Road. 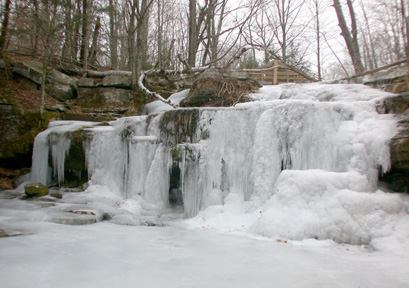 More information and pictures about this section

Permalink Submitted by Visitor (not verified) on Thu, 04/25/2019 - 11:59
Journal Entry Started my 2019 hiking season with a bang via section 21! Rt. 214 to Mink Hollow lean to. One night stay. April 6. All my years of experience just wouldn't settle my "Springer Fever" (AT term). ...And that was costly. A suggestion to others: Please check trail conditions prior to heading out no matter what kind of gear you have or age you are. NOTE to fellow travelers: Follow Notch Inn Road to the very end (big house on right-very top of hill) ...trail is directly in front of you) Climbing Plateau was a rough go and though the summit was beautiful ... still with two feet of snow, some frozen over ... most "sinkable" with each step; resulting in drenched socks. Descent off ridge was with high danger as per the solid ice drops off the rock ledges, some about five foot down with NOTHING to grab hold of. I say again...NOTHING! Mink hollow lean to; Though pleasant and peaceful ... included a major drop in temps after midnight. Morning coffee was divine! Climbing back out of the hollow was equivalent of the descent. Take care all ... spikes, boot chains or not. Enjoy as is. I did in spite of...doing things the ol fashioned way...