The first part of this section runs along a DEC snowmobile trail that ascends the northern slopes of Kaaterskill High Peak on rather gentle grades. After leaving the snowmobile trail, the Long Path descends gradually at first and then steeply to the old Red Gravel Hill Road, which it follows the rest of the way. For the next two miles it is level, passing a series of dramatic waterfalls with a spectacular view into Kaaterskill Clove. After a brief ascent, it descends continuously into Palenville, passing a number of abandoned bluestone quarries. For most of this section, blue DEC trail markers mark the Long Path. The last part of the section, which crosses private property, is marked by aqua paint blazes.

Take the New York State Thruway to Exit 20 (Saugerties). Continue on NY Route 212 west to the small town of Centerville. As Route 212 curves to the left, bear right onto Ulster County Route 35 and stay on it for the next 1.6 miles. Shortly after passing the Blue Mountain Campground, Route 35 makes a sharp left turn. Turn left here, but afterwards continue straight ahead on Ulster County Route 33, as Route 35 turns right. In about two miles, the road (now known as Platte Clove Road or Greene County Route 16) turns into a dramatic mountain road that climbs over 1,000 feet in less than three miles. At the top of the climb, four miles after leaving Route 35, the road crosses a small brook; the trailhead is immediately beyond the brook on the right at the intersection with Steenberg Road.

Take the New York State Thruway to Exit 20 (Saugerties). Take NY Route 32 north to NY Route 32A. Continue on Route 32A north to Palenville. Turn left (west) onto Route 23A, and follow it through Kaaterskill Clove and past Haines Falls to Tannersville. In Tannersville, turn left at the traffic light and continue along Greene County Route 16 (known for most of the way as Platte Clove Road) to the top of Platte Clove. The trailhead is on the left at the intersection with Steenberg Road.

0.70 Turn right onto another dirt road.

1.05 To the right, an unofficial trail, with yellow markers, leads to Huckleberry Point, an excellent viewpoint. The Long Path continues straight ahead on nearly level grades.

1.35 Cross bridges over a pair of streams in a swampy area. After the second bridge, the ascent resumes, as the trail climbs to the 3,000-foot elevation on the north flank of Kaaterskill High Peak.

2.25 Reach the highest point on the trail in this section in an area known as the "Pine Plains." The trail continues through nearly level, though swampy, terrain. For the next 0.75 miles, the forest is typical of that found at higher elevations, with considerable spruce, hemlock and birch.

3.70 The Long Path turns right (north) onto an old trail that formerly ran from the private community of Twilight Park to High Peak, and begins to descend off the ridge. The descent is often steep and contains many small switchbacks.

4.15 Leave the old Twilight Park Trail and begin to descend over a series of sharp slopes and narrow flat ledges.

4.80 The trail reaches another narrow ledge, turns right on the old Red Gravel Hill Road, and begins to run parallel to the edge of the great drop to Kaaterskill Clove on the left.

5.00 Reach Buttermilk Falls just to the left of the trail, a spectacular two-step waterfall. Cross the stream and continue along a level ledge.

5.50 Reach Wildcat Falls, another spectacular waterfall. The ledge to the west of the falls affords an excellent view of Kaaterskill Clove and the Hudson Valley to the east. Cross the stream and continue along the level trail. You will descend a small ledge to the left, pass a large boulder, and bear right along the slope edge again.

6.00 Cross the two streams of Hillyer Ravine, which provide the last sure source of water in this section. The trail now ascends slightly and crosses several intermittent streams.

6.80 A yellow side trail on the left leads in half a mile to Poets Ledge, a popular hiking destination.

6.95 Reach the crest of the rise and begin to descend. The trail continues downhill, at times steeply, until reaching Malden Avenue. The trail uses several long switchbacks in its descent, and an old bluestone quarry is passed to the right of the trail.

8.50 Cross the state land boundary. The Long Path now runs over private property and the trail markers change to a mixture of aqua paint blazes and blue DEC plastic markers.

8.90 Reach Malden Avenue in Palenville and turn left along the road. Pass the Fernwood Inn on the left.

9.05 The road is closed to vehicular traffic.

9.40 After going around another barricade, which blocks vehicular traffic, turn right onto NY Route 23A.

9.80 The section ends at a DEC parking area on the left, just east of an "Entering Catskill Park" sign. To continue, turn left into the parking area and continue on an old road. 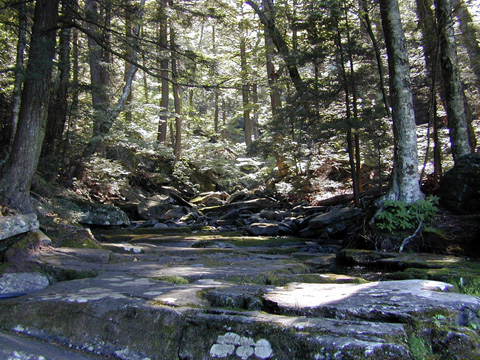 Permalink Submitted by Visitor (not verified) on Sun, 04/18/2021 - 22:33
My daughter Julia joined me for this leg of the LP on the penultimate Sunday in April 2021. It was Julia's 4th hike with me on the LP. We left our home in northern NJ a few minutes before 7AM and met our driver from Smiley's Taxi company at 8:30 in Palenville at the Stage 22 terminus. As the LP has progressed in an Eastward direction over the past week, the drive-time from points south has pleasantly decreased with the trail now situated just a few miles off the I-87 Northway. These short drives has me feeling like the Central Catskills LP hikes are in my backyard! Just 90 minutes to get to a remote locale like Kaaterskill Clove!! Our driver was a landsman from our part of Jersey, but he was quite familiar with all the local trailheads in the area of the Devil's Path. The taxi fare to get from Palenville to Platte Clove Road was a reasonable $55 (they've got to make a living and also provide a great service to hikers). Our taxi shuttle took us thru the periphery of Tannersville, an authentically quaint Catskill village. I'd like to put Tannersville in a bottle and bring it back with me to North Jersey. Today's hike was a few orders of magnitudes easier than the previous Stage's Devil's Path (no kidding!). The initial ascent was gradual and even the steep descents were moderate. Speaking of ascents and descents, the electronic LP book is a giant advance over the previously available hard copy; however, the old paper book had neat pictoral graphs associated with each Stage that showed changes in elevation (y-axis) per distance traveled (x-axis). I hope the NY/NJ Trail Conference can add these useful graphs to this website. The main issue we dealt with on the Stage 22 hike was the ground water. Much of the 9.8 miles was spent trodding thru swampy terrain - I do not mean to suggest any negative connotations to 'swampy' - just that it was wet. I had spent the better part of the last few days trying to get my hiking boots dry from the torrential rain and Egyptian hailstrom I experienced on Stage 20, but these efforts were for naught as both Julia's and my shoes were drenched a few miles in. Highlights today were the 2 fantastic waterfalls - Buttermilk and Wildcat - separated by just 0.5 miles from each other. Appreciating the splendor of each of these Falls required one to peer down from the cliff's edge, a bit much for Julia. The views across to Kaaterskill Clove were truly inspirational. There were two small downers on the day. First, I lost my hiking poles on the trail. I put the poles on the ground early in the hike when I got some nutrition out of my pack and didn't remember them till 1.5 miles later. If I was alone, I would've gone back, but I couldn't add 3 miles to Julia's hike (my justification). I told a couple of hikers going in the opposite direction that finders keepers and enjoy them. I actually feel very guilty about losing these $70 middle-of-the-line hiking poles. However, yesterday my wife got a $400 check in the mail from Neiman Marcus (not Joe Biden). She completely clammed up when I inquired what this was related to. Why would Neiman Marcus send her a fat check? Refund? Overpay? For what purchase? It's completely surrounded in secrecy. I've gotten nowhere trying to get answers. I tried to make my wife feel guilty about wasting so much $$ at Neiman Marcus (I assume she must've paid much more to get $400 back!!), but I've now lost the moral high ground by abandoning my gear on the trail. Regardless, I'm going to ask her to pay for my new hiking poles with this check. The other downer was the thousands of flying nats that attacked us on our descent into Palenville after passing Poets Ledge. Julia and I waged a bitter war with these nats. When I got back to Jersey I went directly to CVS to arm myself with bug spray for tomorrow.