The Shawangunk Ridge Trail (SRT) begins where the Appalachian Trail heads east from the Kittatinny Ridge in High Point State Park in New Jersey. After leaving the Appalachian Trail, the SRT passes the highest point in New Jersey, where there is a spectacular view. The trail then continues through High Point State Park. A highlight of the trail is Cedar Swamp, which is a mountaintop cedar bog. In High Point there are three separate ridges; the trail uses all three. Past Cedar Swamp the trail ascends and crosses the border into New York, where it attains the westernmost ridge. The trail then follows the western ridge to Greenville Turnpike, and after a short walk on the Greenville Turnpike heads into the woods again. The trail follows public roads to pass underneath Interstate 84.

0.00 The Shawangunk Ridge Trail (SRT) begins in High Point State Park, where the Appalachian Trail (AT) intersects the Monument Trail. The AT turns right at this point and descends east off the Kittatinny Ridge. The SRT is co-aligned part of the way with the Monument Trail, which is marked with red and green squares on a white background. After leaving the AT, the SRT ascends through the woods, passing through a rocky area. The trail crosses the High Point Monument Road, turns right and climbs steeply on a gravel path to the High Point Monument. 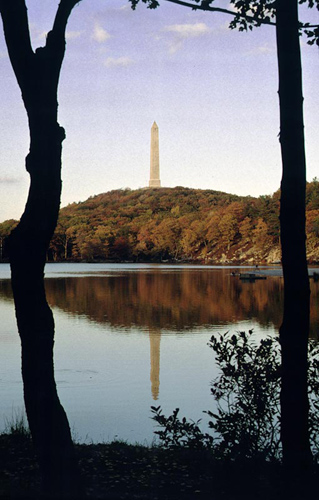 0.30 The trail reaches the High Point Monument, the highest point in New Jersey. From this vantage point there is a spectacular 360-degree view. To the south you can see down the Kittatinnies across the Delaware Water Gap into Pennsylvania. To the west you can see across the Delaware River into the Poconos. To the northwest is the city of Port Jervis, with the Delaware River beyond. The Catskill Mountains are visible to the north, 70 miles distant, and to the northeast is a view all the way up the Shawangunks to Mohonk. To the east you can see into the Wallkill Valley, with the Taconics and the Hudson Highlands in the distance. The highlands of western New Jersey are visible to the southeast. You can take a trip up to the top of the High Point Monument, but it is not necessary for the view. Past the monument, the trail descends gradually to the parking lot. As it descends, the trail passes a park bench with a view across the escarpment to Port Jervis and the Delaware River. The trail passes a concession area with picnic tables. Beyond the picnic area is a public restroom with water fountains. After the restrooms, the trail reaches the parking lot and follows the western edge of the lot in a grassy area.

0.95 A side path leads left where there is a view west toward Port Jervis and the Delaware River. Shortly, there is a path to the right to a rock outcropping with a view southeast toward northwestern New Jersey. The trail passes another view to the right and then begins a gradual descent to Cedar Swamp.

1.85 The trail turns right and crosses Cedar Swamp on a boardwalk. Cedar Swamp is a magnificent mountaintop bog that is filled with cedar, wild rhododendron and hemlock. Part of the Dryden Kuser Natural Area, Cedar Swamp is the most inland example of Atlantic white cedar, normally a coastal plain evergreen tree. It was named for New Jersey State Senator Dryden Kuser, a leading conservationist and the son of Colonel Anthony Kuser, who donated the land for High Point State Park to New Jersey in 1923.
In New Jersey, a natural area has the same protection as a New York wilderness area has. Normally a natural area is designated only in an ecologically significant area. After crossing Cedar Swamp, the trail continues along a woods road on the western side of the swamp.

2.70 The trail turns left and descends on an old woods road toward a stream crossing in a col. After the stream crossing the trail makes a gradual ascent toward the New York border.

3.10 The trail leaves High Point State Park and crosses into New York by a border monument. After crossing into New York the trail is on private land. Please be respectful. The trail climbs up to the westernmost ridge and heads north along the ridge. Once in New York, the name of the mountain range changes from Kittatinny to Shawangunk.

3.25 The trail reaches a viewpoint west over Port Jervis and the Delaware River. The trail then heads north along the slab with a view north toward the Catskills. Shortly, the trail descends into the woods and then follows the ridge north. It climbs back up to an area of scrub oak and pitch pine, and then turns back north.

3.75 To the left, through the trees, is a view of the Delaware River and Port Jervis. The trail then begins a gradual descent off the ridge, crosses a woods road, descends to a small stream and levels out.

4.95 Turn left off the Greenville Turnpike at a DEC parking area, onto an old woods road into DEC lands The trail is now blazed with blue DEC blazes most of the way. The trail passes between two houses and passes to the left of a blazed rock, then turns right.

5.60 Turn left on an old woods road, then soon turn right off it.

5.85 The trail reaches an open cliff with views of the Delaware River and the mountains of Pennsylvania beyond it. The trail starts descending.

6.00 The trail crosses a powerline, and soon passes near a parking area off Interstate 84 and begins ascending.

6.40 The trail reaches another fine viewpoint. Except for the highway noise, which depends on the wind direction, this section of the trail is very nice. The trail keeps ascending to the summit of a low peak, then descends into a valley.

6.80 Cross a seasonal stream. The trail passes by several stone walls and old woods roads, then climbs another summit (Minisink)  before descending again.

7.70 The trail turns left on US Route 6 (to the right is a deli) and crosses under Interstate 84.

8.30 Hathorn Boulevard veers left but the trail continues straight onto Lakeside Drive along the eastern shore of Hawthorne Lake. On the right is Lookout Drive.

8.55 The trail reaches the end of the road and the end of this section. There is a cul-de-sac with room to park several cars, and the trail continues into the woods on an old woods road. 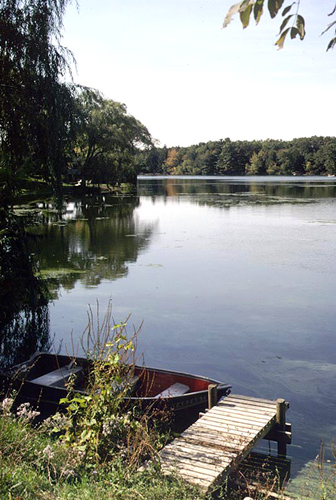