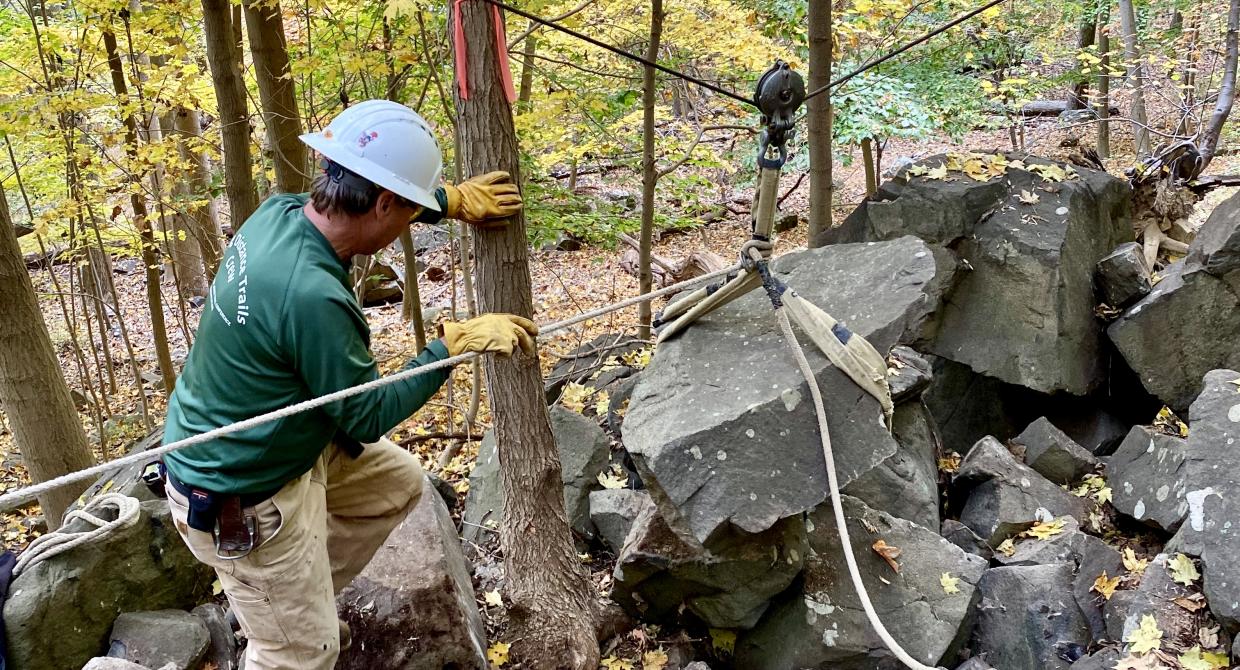 In the shadow of Hook Mountain, the Upper Nyack Trail has been an important connection from Nyack Beach State Park to the Long Path for many years. It is a utilitarian trail that facilitates a great 6-mile loop hike: over Hook Mountain on the Long Path, into Rockland Lake State Park, and returning to Nyack Beach on the River Trail. With 360-degree views from the top of Hook Mountain that feature stunning river vistas and the New York City skyline, the hike is one of the more popular in the region. The old Upper Nyack trail, while useful, ran through some wet dark areas and also included a road walk. Thanks to the work of Trail Conference volunteers, the experience is now even more enjoyable.

The new and improved Upper Nyack Trail, opened to the public in June, was several years in the making. Its creation was made possible by the purchase of 30 acres of undeveloped land from the Marydell Faith and Life Center. Adjacent to Nyack Beach and Hook Mountain state parks, this parcel would have been coveted for residential development; its purchase by the Trust for Public Land in 2017 was a significant win for conservation in Rockland County. The acquisition was made possible through the combined efforts and funding of the Trail Conference, New York State, Mid-Hudson Regional Economic Development Corp, Town of Clarkstown, Village of Upper Nyack, Durst Organization, Open Space Institute, and the Trust for Public Land. Soon after the sale, work on the new trail began: A route for the trail was scouted, mapped, and proposed for approval to the Palisades Interstate Park Commission, who assumed management of the land once it was incorporated into Hook Mountain State Park. The approval took into consideration the access and safety of the route while ensuring no ecological or archeological resources would be affected.

The construction of the trail, along and through a steep slope of boulders eroded from Hook Mountain, was taken on by the skilled and dedicated volunteers of the Long Distance Trails Crew. This Trail Conference crew works on long-distance trails such as the Appalachian Trail, Long Path, and Highlands Trail. While the new Upper Nyack Trail is not technically a long-distance trail, because it is an important connection to the Long Path, the crew agreed to take on the challenge.

Construction began in 2019. Though less than a mile in length, the technical work required to build a safe, sustainable route through such challenging conditions took almost 2 years to complete.  The crew, which generally works Friday, Saturday, and Sunday every other week from early spring to early winter, put in over 7,31 thousand volunteer hours (and hundreds of gallons of sweat, as well as a little blood) into the project.

The easily accessible location for this project was a welcome change for the crew, which frequently works on projects that require several miles of hiking just to get to the worksite. However, the difficult and occasionally dangerous conditions posed by the slope of boulders over which the trail traverses created a significant challenge. Many of the experienced crew members said that it was the most difficult site they had worked on; it was often challenging just to get level footing.  Throw in rolling boulders, swarming bees, and an overly friendly wild turkey, and the challenge was on. The many bumps, bruises, and bites suffered by the crew resulted in renaming the site “Ouch Mountain.”

To create this trail, large boulders (up to 1,000 pounds each) had to be moved, manually, using rock bars and a high line. These boulders were moved into low spots and drainage channels to form stepping stones. In other places, rocks were placed along the route to level it, then smaller rocks were wedged into gaps around it. Then crush—literally gravel-sized rocks manually crushed by crew members from larger rocks—was used to fill in the smaller gaps. The footbed was then finished by covering the rocks and crush with dirt that was dug up nearby and carried in buckets to the trail.

The trail has received rave reviews from many users, including experienced hikers. It was officially opened during a ribbon-cutting ceremony on June 18, which was attended by many of the politicians, volunteers, and partners who made the land acquisition and trail possible. Featuring spectacular summer weather, the event and subsequent hike were a true celebration of the lovely location and the successful completion of an amazing project.

“This marvelous trail provides much better access to Hook Mountain and completes the vision of the partners who worked with the Sisters of Mercy over several years to purchase this key property for public use,” said Carter Strickland, New York State Director of The Trust for Public Land. “Close-by nature helps provide a free outlet for physical exercise and the mental relief we all need, especially during Covid, and now more people will be inspired by the wonderful views of the Hudson River and highlands at the summit of Hook Mountain. Congratulations to the Trail Conference for the design and execution of a trail across very challenging and technical terrain.”

Check out this new trail for yourself!

New Life for the Old Trail

When the acquisition of the land from Marydell was completed, the intention was to build a new trail and abandon the old one. However, since the opening of the new Upper Nyack Trail, many have found that the two trails now facilitate a nice, 3-mile loop hike from Nyack Beach, up to the Long Path, and back to Nyack Beach. Additionally, the old trail provides access from Palmer Drive in Upper Nyack, a popular access point that led some to lobby to keep the old trail. While partly on private land—meaning the trail’s use is not within our control in perpetuity—for the near future, the old trail will continue to be maintained by the Trail Conference. Plans are in place to improve it, re-blaze it, and extend it through the recently acquired and conserved River Hook: The Hester Haring Cason Preserve.

Gratitude goes to the following for making the new Upper Nyack Trail possible:

Bob Stien, David Neil, Elizabeth Co, Melody Patrick, and the rest of the Friends of Rockland Lake and Hook Mountain