761 miles of trails are maintained by 38 Trail Conference volunteers and member groups.

Find descriptions of great hikes in this region: click here.

Standing high above the valleys on either side, the Shawangunk [pronounced SHON gum] Mountain range is a continuation of the ridge that is known as Blue Mountain in Pennsylvania and Kittatinny Mountain in New Jersey. It reaches from the New York-New Jersey line northeast to Rosendale. Referred to affectionately by hikers and climbers as the "Gunks," the region offers a hiking experience of great variety and beauty. Veteran hikers will find the challenge of rough trails and rock scrambles, while less ambitious hikers mayenjoy spectacular views from gentle carriage roads. The dramatic landscape is fashioned of miles of white cliffs and ledges, clear mountaintop lakes, deep oak forests, and sparse ridge top barrens of bonsai-shaped pitch pines.

The Shawangunks are an especially fine place to study the effects of Ice Age glaciers. The extremely hard quartzose rock has tended to preserve most of the glacial grooves, striations, and chattermarks that were carved by the boulder-laden glacial ice over 10,000 years ago. The glacial markings on rocks in the Shawangunks tend to be more frequent and clearer than those found on bed-rock surfaces in the Hudson Highlands and the Catskills.

The northern Shawangunks, from Ellenville north to Rosendale, comprise a 25,000-acre natural area that contains the majority of the Shawangunk trails. The area is divided into four major ownerships, each with its own trails, access points, and fees. At the northern end is the Mohonk Preserve, which nearly surrounds the second area, the Mohonk Mountain House lands. The Minnewaska State Park Preserve occupies the wide mid-section of the ridge, and is the largest single ownership. To the south of Minnewaska is the Sam's Point Preserve.

Hiking in the southern Shawangunks, from Ellenville south to the New Jersey border, is largely confined to the Shawangunk Ridge Trail, which is part of the Long Path system.

Parks and preserves in this region include: 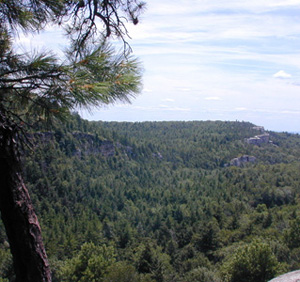