This section of the Long Path starts pleasantly as it passes through farm country. The section begins where the Long Path crosses NY Route 443 and follows a grassy road past a farm house to reach Stage Road. For the next mile the trail continues though fields and forests until it reaches Sawmill Road. The trail then continues along local roads to John Boyd Thacher State Park. The Long Path follows a series of trails through the park, emerging on the cliffs of the Helderberg Escarpment at the overlook on the north side of NY Route 157. Here, there are spectacular views northeast into Vermont. This ridge is made up of a core of limestone in which were found many fossils during the early days of geology in the 1800s. These fossils are known worldwide for their sequence from the Silurian to the Devonian eras. Early studies in this area helped lay the foundations for modern paleontology and geology. The Long Path then turns north and descends on the historic Indian Ladder Trail under the base of the cliffs, then follows the western boundary of John Boyd Thacher State Park northward. It continues north through the park along a newly constructed ski trail, with the Helderberg Escarpment to the right. The Long Path climbs to the top of the escarpment and heads in a generally northwest direction through the woods. The section ends at the north end of the park in the parking lot off Old Stage Road.

Take the New York State Thruway to Exit 22 (Selkirk). Turn right on NY Route 144 and continue south to NY Route 396. Turn right on Route 396 and follow it 6 miles to South Bethlehem, where Route 396 ends and the road becomes Albany County Route 301. Follow Route 301 west another 6 miles to its end at NY Route 443 in Clarksville. Turn left on Route 443 and follow it west about 5 miles to the second intersection with Stage Road, 1.5 miles from the intersection of NY 443/85.

0.00 The Long Path crosses Route 443 just east of the driveway of a private residence and heads uphill in a northeasterly direction along the edge of a large field. Soon the trail turns left, then right, to follow a grassy road which parallels the edge of the field. The trail climbs gradually and passes a farm house on the left when it reaches Stage Road.

0.10 The trail turns left and follows Stage Road until it reaches a hedgerow bordering a field on the left.

0.40 At the hedgerow the trail turns left away from the road and descends gradually north along the west side of a hedgerow. There is an expansive view west, across open fields, toward Cole Hill and the Schoharie Valley.

0.80 Bearing right through a gap in the hedgerow, the trail enters a young hardwood forest and turns gradually east (right). At a logging trail, it turns north (left).

1.00 The trail reaches Sawmill Road and turns north (left) on Sawmill Road, near its intersection with Stempel Road.

1.35 At the intersection with Long Road, the trail turns right and follows Long Road east.

3.90 The trail turns right and follows a gravel park road.

4.35 A nature trail comes in from the right at the head of a ravine. The Long Path continues ahead, gradually descending on the left side of the ravine.

5.10 The Long Path turns left and follows a woods road that leads into the Upper Knowles Flat Picnic Area. The trail follows the north edge of the picnic area, and then descends right on a gravel path to the paved access road. The trail then turns right on the access road to intersect Route 157.

5.40 The Long Path crosses NY Route 157 and reaches the overlook parking area. The trail turns left and follows the overlook along the edge of the escarpment. There is a spectacular view across the upper Hudson Valley to the Green Mountains of Vermont and the Adirondacks of New York. At the end of the parking area, the trail continues to follow the escarpment fence through the woods. 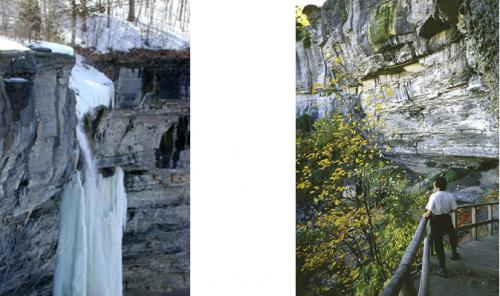 6.45 The Long Path reaches the northern end of the Indian Ladder Trail. Pass the Thacher Visitor Center to reach the parking lot. Go along the edge of the parking area to the park entrance gate  where it crosses the guardrail and goes through a field behind the administration building.

6.60 The trail enters the woods and follows a newly constructed ski trail, which parallels the park road heading north. The Helderberg Escarpment is visible to the east of the park road. 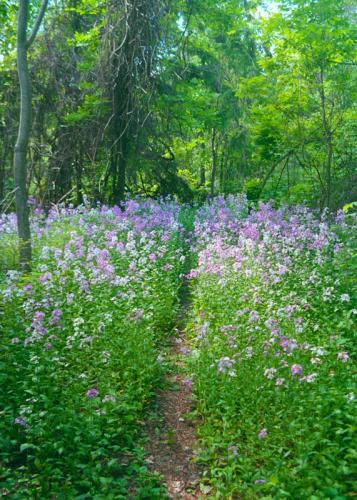 7.35 Halfway northwards along the edge of the second field, the trail turns right into the woods. Many narrow fissures, some very deep, crisscrossing the woods mark this section of trail. The trail parallels and then crosses a stone wall to reach an old woods road.

7.55 The trail turns right on the old road and enters the OSI Thacher Park Nature Preserve.

7.75 The Long Path turns left off the woods road to climb along a switchback to the top of the ridge and a junction with another woods road.

7.85 The trail meets a yellow-blazed woods road leads left in 0.3 miles to Ryan Road and a small parking area. The trail turns right and follows the crest of the ridge through a mixed forest of pine, hardwoods and low-growing juniper.

8.25 After reaching a cairn that marks the highest point on this trail section, about 1,410 feet, the Long Path descends gradually from the escarpment, staying near its edge. 8.65 The Long Path reaches a junction with another trail (blazed white) and turns right, descending steeply to a gravel road used by hang-glider enhtusiasts to access a take-off pad at the edge of the escarpment. Turn left on the hang-glider road. (To reach the hang-glider launch site, continue straight ahead on the road at this point.)

8.85 The trail leaves the hang-glider road and bears right, circling a depression in the escarpment.

9.25 Reach the middle of an old juniper stand and turn right. The forest along the trail is laced with fascinating fissures caused by acidity eating away the escarpment’s limestone.

9.35 A red-blazed trail joins the Long Path from the left. Both Long Path and red blazes now mark the trail.  It is important to remain on the trail in this area, to avoid potential injury from stumbling into a fissure.

9.75 The trail reaches a point where it turns sharply left, heading west. Just ahead and to the right is an open 'High Point' viewpoint. To the right Mt. Everett in southern Massachusetts is seen peeking over the shoulder of the hang-glider opening. Panning north you will see Albany, Mt. Greylock, the Town of Altamont, and Vermont’s Green Mountains with Killington and Pico Peak prominent.

9.95 The Long Path crosses a white-blazed woods road. The Long Path continues past a stone wall to the left onto a segment of an old woods road, then bears left away from the woods road through mixed deciduous and evergreen forest, winding through several stands of hemlock.

10.25 The Long Path turns right, leaving the red-blazed trail, and skirts fields and stone walls on the left.

10.45 The Long Path crosses a woods road leading to a field on the left and then skirts the edge of the field.

10.65 The trail crosses a field and then re-enters the woods, passing through many stands of hawthorne bushes.

10.75 The Long Path parallels a stone wall, and then joins an old woods road that also leads to the ‘High Point’ overlook already encountered.

This is currently the "End-to-End" end of the Long Path. The trail has been blazed across the Mohawk River to the Saratoga County line, and from there a route has been described to the Adirondacks blue line, but until more of that route is off-road those sections are not a requirement for the "End-to-End" certificate.

Permalink Submitted by 46r796 on Fri, 11/01/2013 - 21:15
Hiked this section on 9/29/13 to finish up the LP North trail.Woo-hoo. Thacher park area is well marked and well used.Great views.If following the blazes you will miss the Indian ladder trail as the trail follows the top of the escarpment.When hiking in a south to north direction and coming to concrete steps turn right and preceed down to pick up the Indian ladder trail(if open)You wont be sorry as it follows the base of the escarpment and is very interesting.It is about 1/2 mile in length and comes back up to meet with the LP trail again.This fall season has been so dry that the water falls is non existant due to No water. There is many hiking trails criss-crossing the north end of Thacher park,but the LP is easy to follow.Beware of Ticks.Myself, my friend and dog all had ticks.