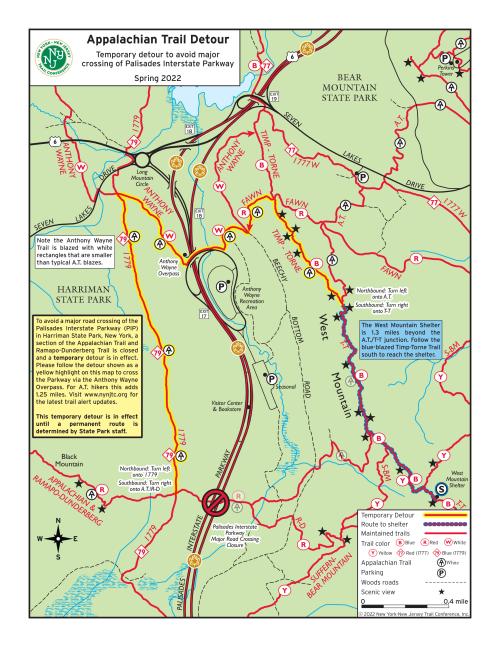 To avoid a major road crossing of the Palisades Interstate Parkway (NOBO mile 1,399.5) in Harriman State Park, New York, a section of the Appalachian Trail (A.T) and Ramapo-Dunderberg Trail will soon be closed, and a temporary detour put in place. While this detour has not yet been fully blazed, hikers are encouraged to follow the detour as shown on the map linked below to cross the Parkway via the Anthony Wayne Overpass. We will update this post when the closure of the current A.T. route over the Parkway has been fully implemented and the detour is in full effect.

This temporary detour is in effect until a permanent route is determined by State Park staff.

Distance to the Shelter is 1.3 miles from the Timp-Torne/ A.T. Junction

North-bound Hikers: To use the West Mountain Shelter, after crossing the Parkway using the Anthony Wayne Overpass, at the Timp-Torne Trail / A.T. junction continue to follow the BLUE blazes along the West Mountain ridge to the Shelter.

South-bound Hikers: To use the West Mountain Shelter follow the BLUE blazes along the West Mountain ridge to the Shelter. To continue hiking southbound return on the Timp-Torne Trail to rejoin the A.T. and cross the Parkway at the Anthony Wayne Overpass.