This section starts along the Basha Kill Rail Trail. The trail follows the abandoned "Kingston Line" of the New York, Ontario & Western (O&W) Railroad. While the walk along the Basha Kill is straight and level, it is a wonderful area, with many fine views across the Basha Kill, one of the largest wetlands in southern New York. In the springtime the Basha Kill fills with runoff from the nearby Catskills and Shawangunks to form a giant lake. At that time of the year, sections of the trail may be flooded. If this is the case, South Road, which parallels the Basha Kill Rail Trail nearby, can be followed to bypass flooded areas. In the summer the Basha Kill is a large wetland with many channels that are perfect for canoeing, and because it is a stop-off point on the Shawangunk migration routes, it is a splendid area for bird-watching. After leaving the Basha Kill the trail follows roads for about 2 miles through the Village of Wurtsboro on its way to the Wurtsboro Ridge. Upon leaving Old Route 17 (Sullivan County Route 171), the Long Path quickly gains the ridgetop. This ridgetop trail section is one of the most dramatic in southern New York, with many spectacular views in all directions. With the forest primarily scrub oak, blueberry and occasional pitch pine; the hiker is frequently above the trees with unlimited visibility. There are also sections of Shawangunk slab, though not as frequently as found in the northern Shawangunks.

Take the New York State Thruway to Exit 16 (Harriman). Take NY Route 17 (future Interstate 86) west 31 miles to Exit 113, US Route 209 south. Take US Route 209 south 5 miles to Westbrookville. Turn left on Otisville Road and follow it for 0.4 miles to the junction with Indian Orchard Road. Turn left and follow this road (which changes into South Road upon entering Sullivan County) for almost 2 miles to a parking area on the left.

0.00 This section starts in a large parking area with a boat-launching site. From here one can launch a canoe or other non-motorized boat in a side channel of the Basha Kill. From the side channel there are many interesting routes to either canoe or fish. The trail proceeds north along the edge of the Basha Kill. In this section there are many views across the open expanse of water and marshlands, as well as many bird feeding stations on the Basha Kill, making it a good area for bird-watching.

2.00 Reach the main parking area. The trail passes through a gate and reverts to the abandoned rail bed.

2.40 A nature trail leads left 0.1 mi to a raised platform with a spectacular view across the Basha Kill and the mountains beyond. Along this nature trail, markers identify the different trees along the way. Near the platform are several signboards that show pictures of the various flora and fauna found at this location. Unfortunately, the signs have been vandalized.

2.50 The trail passes the north end of the nature trail. In another 300 feet, an unmarked side trail of 0.1 mile leads right to a parking area. 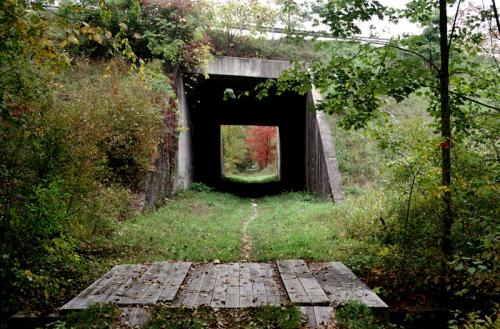 2.90 The trail passes another side trail that leads in 0.1 miles to a parking lot.

3.20 The trail passes a private camp on the right along South Road. There are views to the Shawangunks from here. Beyond this point, the Basha Kill changes from open marshland to a stream with multiple channels that run through the forest. The trail crosses some of these channels on a series of bridges.

3.70 The trail crosses under NY Route 17 (Quickway) in a culvert and continues north.

4.25 At South Road the abandoned rail bed turns into a dead-end street with houses on both sides. The Long Path turns here left onto the road. South Road becomes Pennsylvania Avenue, which the trail follows into the Village of Wurtsboro. On the left is the Mamakating Little League Field, a charming small-town baseball stadium.

5.15 The trail turns right onto the Delaware and Hudson (D&H) Canal Trail.

5.25 Turn right on Sullivan Street. To the left is the Village of Wurtsboro, with several stores and restaurants in this section. Sullivan Street was part of the original NY Route 17 before the Quickway was constructed.

5.60 On the right is the Wurtsboro train station on the Port Jervis-Kingston O&W branch. The trail continues uphill on Old Route 17 (Sullivan County Route 171).

6.20 The trail reaches the abandoned O&W High Line right-of-way just beyond VFW Road. The Long Path turns left and climbs the dirt bank, it's just past the concrete abutment of an old railroad bridge. The Long Path climbs up the embankment into the woods. From now on the blazes are blue DEC discs with occasional LP and SRT markers.

6.40 A white-blazed side trail leads to the VFW post parking area.

6.65 Past a stream crossing, the trail switches right and then left to gain the top of the ridge. As the trail approaches the ridgetop, the trail steepens, and the forest cover begins to thin. At the higher elevations the forest is predominantly scrub oak and blueberry. As the trail reaches this dwarf forest, views begin to open up.

7.20 The trail reaches the top of the ridge, turns north and comes to a section of rock slab where there are spectacular views up and down the ridge. To the south you can see the Basha Kill Wildlife Management Area. This is an excellent area to watch migratory birds. To the west you can see the Village of Wurtsboro below, with NY Route 17 in the distance crossing the mountains to the west. Just to the north you can see Wurtsboro Airport, where it is common to see airplanes towing gliders aloft to float above the updrafts created by the ridge. To the far north the Catskill Mountains can be seen. Beyond this vantage point, the trail follows the western slopes of the ridge. Unlike the northern Shawangunk's, where the most interesting topography is in the east, the southern Shawangunk's are much more interesting on the western side. Development reaches high up on the ridge on the east side. The Long Path proceeds straight ahead just to the left of the slab, into and through the scrub oak. For the next quarter mile or so, the trail alternates between scrub oak forest with views and denser woods. It then begins to descend, gradually at first, followed by a steeper descent to a col.

8.00 The trail reaches a gravel road that leads down to the abandoned O&W railway. After crossing the old road, the trail crosses a stream, water flows in this stream even in the driest times. The trail crosses an overgrown abandoned road and then begins climbing back to the ridgetop on a series of switchbacks. As the trail reaches the scrub oak, views again open up to Wurtsboro Airport and to the south.

8.65 The trail crosses another gravel road that leads down to an abandoned lead mine. It then reaches a rock outcropping with a spectacular view north and south across the valley to the west. This point is just south of Wurtsboro Airport. The large structure below is Kohl's warehouse.

9.20 The trail reaches another dramatic viewpoint. From here it is possible to see northwest to the Catskills and northeast to Roosa Gap and Sam's Point. Beyond here the trail begins a gradual descent toward Roosa Gap with many views along the way.

12.2 View south from the Wurtsboro Ridge with the Basha Kill visible. 2012 [JAKOB FRANKE]

9.60 The trail reaches a large overhanging boulder. Again, there are views into Roosa Gap and northwest to the Catskills. Below is the water-filled Summitville section of the old D&H Canal, now a county park. The towpath of the old canal has been restored here. On the ridgetop to the north is an old fire-lookout tower. The trail will pass by this tower; see next section. Beyond the boulder, the trail turns right and descends to a seasonal stream. At the seasonal stream, the trail turns left and descends more steeply along the left bank. At the bottom of the grade, the trail crosses the stream, passes through a stand of mountain laurel, and then reaches a larger stream at the bottom of Roosa Gap.

10.20 Immediately after the stream crossing the trail crosses a woods road, which to the right is blazed with yellow DEC markers and leads in about 0.7 miles to a parking area at the corner of Shawanga Lodge Road and Ferguson Road. This yellow trail passes a nice little waterfall in a ravine with slate walls. The Long Path turns left onto the woods road.

10.30 The trail turns right, off the woods road, and begins to ascend. Soon it enters private land, and the blazes change into the standard Long Path aqua blaze. Beyond the land boundary the trail climbs to Ferguson Road through a large switchback.

10.50 The trail reaches Ferguson Road, the end of Section 12. Just to the left of the trail there is room to park several cars. The trail crosses the road about 0.7 miles west of the height of land and a DEC parking lot at the corner of Shawanga Lodge Road and Ferguson Road.

Permalink Submitted by Visitor (not verified) on Thu, 03/25/2021 - 22:33
I took a rain-day yesterday, but was back for Section 12 this morning on the first day of the year to hit 70 degrees in the region. My daughter Julia joined me for this as she had on section 9. We drove from our home in Englewood, NJ to Basha Kill and were hiking by 9:30AM. It was cloudy and foggy in the morning, perfect Basha Kill conditions. It seemed like the birds and frogs prepared a world-class chorus just for us. This part of the hike was flat but traversed an amazing & unique wetland. Here is a funny tidbit: At the end of the day in our taxi ride back to our car, I asked our cabbie if she hikes in Basha Kill. She said she dislikes the Reserve because of all the mosquitos. I didn't notice any mosquitos the last couple of days, but when I got out of the cab I was attacked by a swarm. They must've hatched on this first day of summer weather. I'm glad I did Basha Kill when I did. The walk into Wurtsboro was very bucolic and coincided with the appearance of the sun. We had a late breakfast at the little league field of dreams outside of town. I was pleasantly surprised to learn that Wurtsboro had a quaint downtown area. We hiked past a Harley-Davidson shop that I'm sure is iconic to bike enthusiasts. The walk up Old Route 17 (now called 171) was tough on Julia (of course it was nothing for me). It felt good to realize we were officially in the Gunks when we entered the woods. The climb up to the ridge was moderate, but both Julia and I took spills on limestone rocks that were surprisingly slippery after yesterdays rain. The views from the ridgetop were classic and somewhat familiar having hiked in this region intermittently over the past 30 years. The last climb up to Ferguson Road felt just right at the end of another special day. On this hike, I really appreciated the difference between a thru hike and a day hike. Nobody would construct a day hike thru the town of Wurtsboro and up Old Route 17, but as part of the big picture on a thru hike it was not only necessary but an important part of the landscape to experience. The only glitch today was that on the drive home down the Rt 17 Quickway Julia realized that she lost her iPhone on the hike. Ironically, the iPhone was in a teel-colored case (same color as the LP markers). She cried for a few minutes in the car, but then perked up and exclaimed "Gam Zu L'Tova" (it's all for the best). And Julia was right because my amazing wife is currently in the Apple Store on 5th Avenue buying her a brand new phone!