This section of the Long Path offers dramatic scenery. From North Lake, the trail proceeds north along the Catskill Escarpment (also known as the "Great Wall of Manitou"), with many spectacular views of the Hudson River valley over 2,000 feet below. Thomas Cole of the Hudson River school of painting made this area famous. After a steep climb to North Point, the trail becomes more rugged, descending from Stoppel Point to Dutcher Notch and then climbing Blackhead Mountain. The summit of Blackhead is the second highest point on the Long Path. North of Blackhead, the trail descends to the Batavia Kill Trail along one of the steepest trail sections in the Catskills. For the entire length of this section, the Long Path follows the Escarpment Trail, blazed with blue DEC trail markers.

Take the New York State Thruway to Exit 20 (Saugerties). Take NY Route 32 north to NY Route 32A. Continue on Route 32A north to Palenville. Turn left (west) onto NY Route 23A, and continue through Kaaterskill Clove to Haines Falls. In Haines Falls, turn right onto Greene County Route 18 and follow the signs to North Lake State Campground 3 miles ahead. Pass through the gate (a fee is charged in season) and continue ahead to the parking area at North Lake.

0.00 From the end of a short side trail that begins at the east end of the parking lot, the Long Path proceeds north along the blue-blazed Escarpment Trail, passing through a picnic area. The trail passes a register box and begins to ascend.

0.30 After a short, steep climb over a rock ledge, the trail reaches Artist Rock, which provides a good view of the Hudson River valley. Artist Rock was made famous by Thomas Cole, the founder of the Hudson River school of painting. Beyond Artist Rock, the trail climbs a series of small ledges and passes through an area of hemlock, white pine, pitch pine, red spruce and balsam fir. The trail passes a large rock ledge on the right. This was the site of "Jacob's Ladder," which allowed Catskill Mountain House visitors to climb up to Sunset Rock above.

0.80 To the right, a yellow-blazed side trail leads to the top of Sunset Rock, which offers a dramatic view of North and South Lakes and the site of the Catskill Mountain House, with Kaaterskill High Peak visible directly behind the lakes. This was the site of one of Thomas Cole's most famous paintings.

1.00 Reach Newman's Ledge, a large overhanging rock outcropping with a spectacular view north over the Hudson River valley. On a clear day, the tall buildings of Albany are visible in the distance, with the Taconics and Green Mountains of Vermont beyond. The trail now climbs about 140 feet and emerges in an open area, with an interesting mountaintop swamp that is well worth exploring.

1.55 The yellow-blazed Rock Shelter Trail leaves to the left. This trail drops into Mary's Glen and continues to the gatehouse at the entrance to the North Lake area. From Mary's Glen, the red-blazed Mary's Glen Trail can be followed back to North Lake. The Rock Shelter Trail is named for a large overhang known as Badman's Cave, which was reputed to be a hideout for outlaws in the 1700s. The Long Path continues to the right and climbs through a rocky area in a spruce-balsam forest.

2.20 The red-blazed Mary's Glen Trail leaves to the left. This trail descends through a beautiful wooded area and provides an alternate return route to North Lake. The Long Path continues ahead and begins a very steep ascent to North Point.

2.35 Reach North Point, an open rocky ledge, which provides a spectacular 360-degree view. To the south, directly below, are North and South Lakes, with Kaaterskill High Peak and Roundtop in the background. To the east is the ridge of the Escarpment that we have been following, with the Hudson
Valley precipitously below. To the west and immediately ahead is North Mountain, with Blackhead Mountain behind to the right (northwest). The City of Albany is visible in the distance to the northeast. From here the trail continues to climb North Mountain.

2.80 Reach the summit of North Mountain. While only slightly over 3,000 feet high, North Mountain has a spruce-balsam forest that is characteristic of the higher elevations. The trail continues up, at times steeply, through brushy, rocky areas.

4.05 Reach Stoppel Point, which provides a view northeast over the Hudson Valley, with Albany and the Taconics in the distance. Stoppel Point was the site of a recent plane crash, and parts of the wreckage may still be seen. From Stoppel Point, the trail begins to descend towards Dutcher Notch, with occasional views of the Blackhead Range through the trees, and then levels off.

5.15 The trail curves to the north and resumes its descent. Just before the descent, there is an excellent view back to the southeast. From here, it is evident that one has already descended a substantial distance from Stoppel Point. After a short, steep descent, the trail levels off again.

6.30 After another short, steep descent, the trail reaches Dutcher Notch, the lowest point on the Escarpment Trail since just beyond North Lake. To the right, the yellow-blazed Dutcher Notch Trail drops 1,700 feet in 2.4 miles to Floyd Hawver Road. There is a reliable spring on the Dutcher Notch Trail at 0.35 miles and about 500 vertical feet below this point, the only reliable water in this section. To the left, the yellow-blazed Colgate Lake Trail descends to Colgate Lake, first passing around an unnamed lake and skirting private Lake Capra. The Long Path continues straight ahead, beginning a steep ascent to a level area sometimes known as Arizona Plateau. 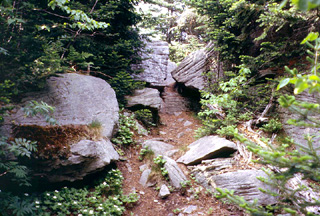 7.15 After an 800-foot climb, the trail reaches the Arizona plateau and begins to level off. To the left, a short side trail leads to a viewpoint back towards Stoppel Point and Lakes Capra and Colgate. The trail follows this level plateau for about a mile, with increasingly spectacular views of Blackhead Mountain straight ahead.

8.30 The trail begins its final 600-foot ascent to the summit of Blackhead Mountain. Near the summit, there is a spectacular view to the east over the Escarpment below, with Albany and the Taconics visible to the north.

8.80 Reach the summit of Blackhead Mountain, the second highest point on the Long Path and the fourth highest mountain in the Catskills. The view from the summit is overgrown, but views to the south are possible by heading into the scrub vegetation just left of the trail. Here, the Long Path, following the blue-blazed Escarpment Trail, turns right, as the yellow-blazed Blackhead Mountain Trail goes straight ahead and descends to Lockwood Gap between Blackhead and Black Dome Mountains. (It is worth the 0.2-miles detour down this trail to a spectacular view to the south and west). The Long Path drops precipitously down the north face of Blackhead, plunging over ledges in one of the steepest descents in the Catskills. Near the base of the descent, there are two fine views of the Hudson Valley to the east.

9.80 Reach the base of the descent from Blackhead Mountain. Here, the yellow-blazed Batavia Kill Trail descends to the left, passing the Batavia Kill Leanto in 0.25 miles, and ending at the red-blazed Black Dome Range Trail in 0.9 miles. From this point, the Black Dome Range Trail continues straight ahead to the parking area at the end of Big Hollow Road in another 0.5 miles. To continue on the Long Path, proceed straight ahead on the blue-blazed Escarpment Trail. 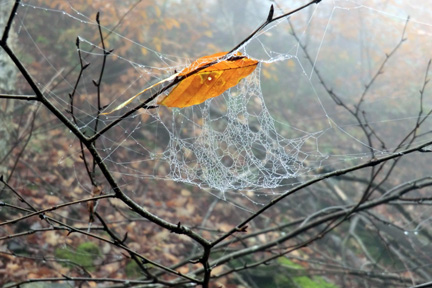