A major relocation of the Long Path was opened in June 2014.  The former roadwalk from Woodland Valley to Phoenicia has been replaced by a beautiful footpath constructed by volunteers. See http://www.nynjtc.org/sites/default/files/Catskills_LongPathRelocation-SlideMountainWilderness_TrailMap2014.pdf

The Long Path follows a new trail along the foot of Wittenberg Mountain and reaches a spectacular viewpoint before descending to Cross Mountain. It is a pleasant hike along Cross Mountain, which is nothing more than a long ridge connecting Wittenberg Mountain with Mount Pleasant. There are several good views of Wittenberg and the Ashokan Reservoir along the way. The trail then passes over Mount Pleasant, about a quarter mile west of the summit, with more nice views of Wittenberg Mountain and a view to the east. Following a series of switchbacks, the trail starts ascending Romer Mountain. From the summit of Romer Mountain, it is a three-mile descent before reaching the DEC parking area at the foot of Romer Mountain. The trail continues on local streets east along the Esopus Creek, and crosses the Esopus into the Village of Phoenicia.

Take the New York StateThruway to Exit 19 (Kingston). Follow NY Route 28 west for 23 miles to Phoenicia. Turn right at the first turn to Phoenicia (Bridge Street). Follow Bridge Street to just before the railroad tracks, and turn left onto High Street. Follow High Street and then Woodland Valley Road 6 miles to the Woodland Valley State Campground. It is a 2.75-mile hike from the campground to the Long Path.

0.00 From the trail junction, the Long Path follows a section of the Phoenicia–East Branch Trail (constructed by volunteers and opened in June 2014) which is blazed with blue DEC markers. The trail passes through an area that is occasionally wet. In about half a mile, the trail crosses a small stream that often has water.

1.15 The trail reaches a spectacular viewpoint on the cliffs. Wittenberg Mountain is rising in the back, Panther Mountain is visible, as are the entire northern Catskills, and from a cliff slightly below, the Ashokan Reservoir can be seen. The trail descends steeply after the viewpoint and in about 0.2 mile passes the Grand Staircase, a series of beautiful rock steps. Past the Grand Staircase, the trail reaches the col between Wittenberg and Cross Mountains. The next couple of miles are mostly ridge walking, with several viewpoints near the summit of Cross Mountain. 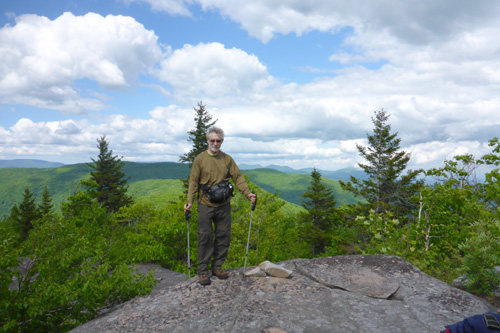 2.35 View from the trail of the Ashokan Reservoir and Samuels Point.

2.40 Another side trail (unmarked) to the right leads to a viewpoint.

2.50 The Long Path reaches the summit of Cross Mountain. The trail starts slowly descending and passes over low cliffs and through several open areas where brambles and blueberries can be found. In about 3/4 mile the trail reaches the col between Cross Mountain and Mount Pleasant and passes through a relatively dark and cool forest, until the trail starts ascending again.

4.00 The trail reaches a fine viewpoint to the west, with Wittenberg and Panther Mountains in full view. The trail then veers to the east side of the ridge, passing a seasonal spring in about 0.1 mile.

4.40 A viewpoint to the east is reached. Below, the Route 28 corridor with the Emerson Resort is visible. The trail swings back to the west side of the ridge.

4.70 Another fine view to the west. Past this view, the trail follows the cliff line for a short while, than slowly descends to the col between Mount Pleasant and Romer Mountain. In the next mile, several switchbacks are passed, after which the trail starts to ascend.

5.75 The trail passes another unmarked side trail to a fine viewpoint to the east.

5.90 The trail reaches the summit of Romer Mountain.

6.70 The trail reaches a cliff, with a seasonal view to the west.

7.10 The trail passes through an interesting crevice and keeps descending, following on occasion stretches of old woods roads.

8.20 The trail crosses a wet area on rock slabs installed by one of the volunteer trail crews.

8.30 The trail turns left onto a woods road. To the right, the woods road leads to an old bluestone quarry.

8.55 The trail makes a sharp left turn. Straight ahead is a short side trail to a pipe spring.

9.10 The Long Path reaches a DEC parking lot at the end of Lane Street. The trail continues out of the parking lot on a local street (Lane Street) and turns left.

9.30 The Long Path turns right on High Street, which runs parallel to Esopus Creek. It crosses under NY Route 28 and intersects Bridge Street.

9.65 The Long Path turns left on Bridge Street, crosses the railroad tracks and then Esopus Creek, and enters Phoenicia. Black Bear Campground is off Bridge Street on the right. The railroad tracks, formerly the route of the Ulster and Delaware Railroad, which once brought trainloads of tourists to this portion of the Catskills. Today, Rail Explorers offers railbike rides from Mt. Pleasant to Phoenicia (www.railexplorers.com).

9.85 Reach Main Street in Phoenicia (Ulster County Route 40). To the left is the center of Phoenicia. While just two blocks long, it is well worth the detour. It is the home of several restaurants and a number of antique shops. There is also a grocery and general store for backpackers to resupply, as well as a B&B. To continue on the Long Path, turn right and proceed eastward on Main Street (Ulster County Route 40). 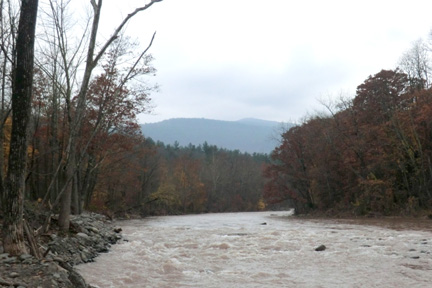 Permalink Submitted by Visitor (not verified) on Tue, 04/13/2021 - 20:55
I took a couple of zero days (i.e. days off) before tackling Stage 19 of LP on account of a foreboding weather forecast. I simply wanted to hike Stage 19 under sunny skies. You can argue that a genuine thru-hiker needs to accept whatever weather comes his or her way. OK, but I made an exception here and would make similar exceptions for other outstanding parts of the LP. One can of course counter that I am even not a thru-hiker because I return home every nite as I still prefer my warm bed to a cold lean-to or flimsy tent. However, I believe that I am thru-hiking the LP!! I have developed a "Ma-Hus" test for determining whether one is a blue-blooded thru-hiker. "Ma-Hus" is a paleo-Aramaic term that is the equivalent of "Raison D'etre" in French and means 'reason for being' or 'entire @#*& life' in more vernacular terms. In simple terms, the LP is my "Ma-Hus" and will be until I get to Stage 35 or am derailed by an act of God. Regardless, I was glad Poseidon took a holiday and allowed the sun to shine today. I met the cabbie from Woodstock Town Car in the parking lot behind the Phoenicia Pharmacy at 8:30AM. I learned 2 tidbits of information from him this morning: (i) Woodstock Town Car is based in Phoenicia, not Woodstock. I think the owner reckoned that the "Woodstock" name would garner more trips to Brooklyn. I admire his entrepreneurial spirit! (ii) The historic Phoenicia Pharmacy exists not more. The cabbie told me that the owner died and sold it (either before he died or his inheritors did). Its now called Phoenicia Arts & Antiques, but if you look closely the old Pharmacy sign is still visible. The ride from the Main Street terminus near the old pharmacy to the Woodland Valley State Campground only amounted to 6 mile trip. The cabbie drove especially slowly to justify his $60 charge. They have a $50 minimum plus tax and tip!! I felt a bit bilked, but the service was good and I do admire their entrepreneurial spirit. The 2.7 mile trek from the Red-marked trail-head in the Woodland Valley Campground to the Blue-blazed Phoenicia–East Branch Trail is not officially part of the LP, but the gradual/steady uphill climb made for a good morning workout. The remainder of the day's grade seemed either flat of downhill. The Phoenicia–East Branch Trail is new and was recently constructed by the NY/NJ Trail Conference. Its a smashing success!! The sweeping views of the Northern Catskills, Wittenberg, Panther, and the Ashokan Reservoir rival some of the best vistas in the eastern United States. While the grade was easy, the many outstanding vantage points truly make this a premier hike. Route finding was generally elementary, although the early miles of the trail can use a Spring clean-up with many fallen branches obstructing the way. I appreciate that it's no small feat to construct a hiking trail de novo these days. In fact, its highly unusual. It would be like building a new subway line. I'm not sure the current United States has the "Ma-Hus" for this. Poor usage of the term! I recall that most of the trails in the Catskills - and perhaps most trails across the U.S. - were constructed during the Great Depression by the Civilian Conservation Corps (CCC) as part of FDR's New Deal. Talk about actual "Shovel Ready" jobs!! After descending from Romer Mountain, I enjoyed the short walk along the Esopus Creek and Downtown Phoenicia was a delight, even though it appeared to be under a Martial law-esque lockdown on account of the "ongoing global pnademic" (we talk'in April 2021!!!...'pandemic' ended a year ago....but why be honest when you can instead vaccinate everyone even if the Covid-risk is negligible and the vaccines have not even undergone standard FDA-approval.....remember the promised 'shovel ready jobs'....'if you like your doctor you can keep your doctor'....etc......the government will prolong this fake pandemic as long as possible....#covidfoeva). Trivia Question of the Day: What's your favorite hipster-gentrified Catskills town (A) Woodstock, (B) Phoenicia, (C) Franklin, (D) Roscoe?