Orange County and the Shawangunks

These sections of the Long Path provide the bridge between the low mountains of the Hudson Highlands in the south and the beginnings of the Catskills in the north. In between lie many small villages and towns set in the gently rolling hills of Orange County. Although not as exciting as sections further north or south, walking the backroads of Orange County move one into an older time and a way of life different from the frenetic pace of city living. It is only by walking the roads ordinarily driven that one can appreciate the different pace of rural living and its dependence on the pace of nature rather than the pace of people. In addition to a large portion of the southern Shawangunk Ridge these sections pass the Basha Kill, a large and beautiful wetland, on their way to Sam's Point Preserve and Minnewaska State Park Preserve. These are one of the most beautiful and interesting areas of the Hudson Valley. Though certainly not the highest or the most exotic parks in New York, they are some of the most colorful in character with their rich and varied flora, fauna, and vistas. 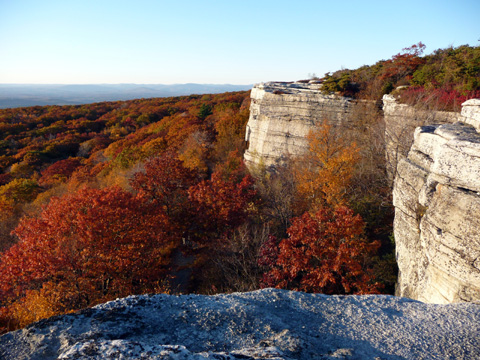