The southernmost sections of the Long Path follow the Hudson River and the Hudson Palisades north, staying close to the river and to civilization. Although the trail does have some quiet forests and lakes, the majority of its scenic vistas look out over the Hudson River and the works of civilization. Its most impressive views encompass towns and villages along the way, but the most conspicuous ones are of the cities and villages on the east side of the Hudson River, not the least of which include the Borough of Manhattan and the City of Yonkers. On most days, it is possible to see barges and tugboats plying the river, and occasionally a small freighter passing as it connects points along the navigable portions of the Hudson River, from Albany south to the great port of New York City. These southernmost sections of the Long Path are the main ones easily accessible by public transportation, making them attractive and easily reachable weekend jaunts into nature for those who live in New York City. 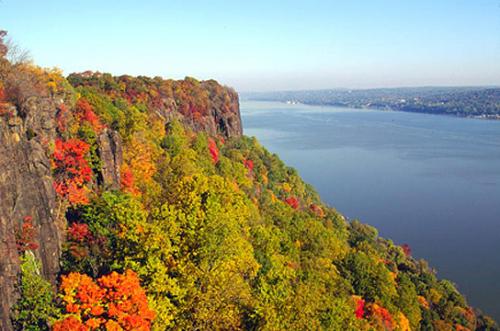