For most of this section, the Long Path follows the Sleepy Hollow Horse Trail, the route of the old Harding Road that led from Palenville to the Hotel Kaaterskill. There are a number of views along this route, which is blazed with the yellow markers of the horse trail. The Kaaterskill Clove Lookout provides a dramatic open view of the Clove, and there are continuous views of the Clove through the trees when the leaves are down. Upon reaching the Escarpment, the Long Path follows the blue-blazed Escarpment Trail, passing the sites of the two most famous nineteenth century hotels in the Catskills, the Hotel Kaaterskill and the Catskill Mountain House. Along the way, there are several spectacular views of Kaaterskill Clove and the Hudson Valley. The section ends at North Lake, once used for recreation by guests of the Catskill Mountain House. Today, it is the site of a large state campground, complete with a beach and a boat rental facility.

Take the New York State Thruway to Exit 20 (Saugerties). Take NY Route 32 north to NY Route 32A. Continue on Route 32A north to Palenville. Turn left (west) onto NY Route 23A, and pass through the Village of Palenville. The section begins a short distance beyond the village, about 100 feet east of an "Entering Catskill Park" sign, where the Long Path enters the woods on the Sleepy Hollow Horse Trail.

0.00 From Route 23A, about 100 feet east of the "Entering Catskill Park" sign, the Long Path proceeds north, following the red markers, the route of the old Harding Road from Palenville to the Hotel Kaaterskill. Shortly after leaving Route 23A, the trail switchbacks to the left and begins a long climb up Kaaterskill Clove. The trail parallels the clove most of the way, climbing 1,400 feet in three miles.

0.25 A woods road goes off to the right. The Long Path continues ahead on old Harding Road.

0.95 Reach a trail register. Here the trail turns right and follows a deep side gorge formed by a stream. Just past the register, the trail reaches Kaaterskill Clove Lookout, which affords a spectacular view to the left into Kaaterskill Clove. Kaaterskill High Peak towers over the clove on the south side. On the right side of the trail, there is a stone fireplace below a small rock ledge. This is a great place for a picnic. Beyond the viewpoint, the trail continues to parallel the gorge, now often lined with hemlock trees. 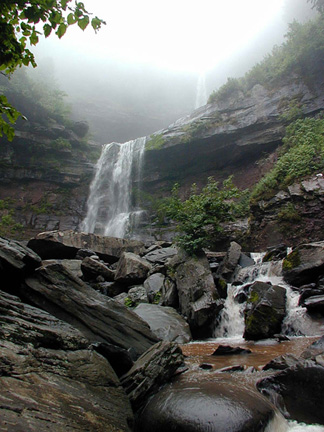 1.20 The trail reaches the head of the gorge and turns left to cross the stream that formed the gorge. There is a small waterfall here. The trail continues uphill, once again paralleling the clove. When the leaves are down, there are continuous views through the trees of Kaaterskill Clove and Kaaterskill High Peak.

1.90 The trail makes a switchback to the right and begins to move away from Kaaterskill Clove. The Long Path now parallels the Escarpment Trail, which runs to the north, about 300 feet above the level of the Long Path. Again, there are views of Kaaterskill Clove through the trees, now with the Hudson River valley beyond.

2.45 Reach a viewpoint to the east, down Kaaterskill Clove, with the Hudson Valley, the Hudson River and the Taconics visible beyond.

2.65 The Long Path turns left, following the red markers, as a horse trail goes off to the right to the Palenville Lookout and Rip Van Winkle Hollow.

3.25 Reach the top of South Mountain. This was the site of the famous Hotel Kaaterskill, built in 1881 by George Harding, an influential guest at the Catskill Mountain House. He had become upset when the Mountain House refused to accommodate the special dietary needs of his daughter. As a result, he left and built his own hotel. That building was destroyed in a fire in 1924. The Long Path turns right, continuing along the blue-blazed Escarpment Trail, as the red-blazed Schutt Road Trail goes off to the left. The Long Path now follows a wide and level trail.

3.85 A red-blazed trail continues straight ahead and provides a shortcut to the Catskill Mountain House, as the Long Path turns right, following the blue blazed Escarpment Trail, which begins to descend.

4.05 Reach Split Rock and Boulder Rock, which afford a fine view of Kaaterskill Clove and the Hudson Valley. Boulder Rock, a large glacier erratic that is perched atop the ledge, makes a fine scramble for those who enjoy bouldering.

4.15 The red-blazed shortcut trail rejoins from the left as the Long Path, still following the blue-blazed Escarpment Trail, and continues north along the ledges. The trail passes an area known as "Puddingstone Hall", named for the conglomerate rock in the area, and descends to the Catskill Mountain House site.

4.55 Reach the site of the former Catskill Mountain House. Built in 1824, it was the earliest and most famous of the old Catskill hotels, and was frequented by Presidents and famous artists. Just east of the hotel site, an inclined railway brought guests up from the Hudson Valley. The Mountain House fell into disrepair in the early twentieth century, when travelers chose the American West and Europe, rather than the Catskills, as the destinations for their summer vacations. It was burned in 1963 by the DEC, since it had become a hazard. The area around the hotel is well-worth exploring. From the hotel site, the trail continues along a former hotel access road towards North Lake and then turns right, along the Escarpment, and follows a chain-link fence.

4.80 The trail passes through a picnic area, where a short side trail leads left to the North Lake parking lot. To continue, proceed straight ahead on the blue-blazed Escarpment Trail.

Permalink Submitted by Visitor (not verified) on Mon, 04/19/2021 - 21:25
The taxi driver is always correct! The masked cabbie from Smiley's Taxi service predicted that all roads into the North Lake State Campground - including those to the North Beach - would be closed until a week before Memorial Day and he was correct. Therefore, I left my car at the parking lot at the western end of South Lake (it's not on the trail map) and shuttled back with the hypochondriac taxi driver to the start on Route 23A in Palenville. Route 23A itself is quite beautiful but can be dizzying, especially if you are prone to motion sickness (masks don't help for this). Today's section was the shortest stage of the LP, but I made a full day of it. The hike up South Mountain was gradual but steady and made for a reasonable morning workout. I admit that I have been going to the Catskills my entire life but have never heard of Catskill Mountain House or even Kaaterskill Falls. I feel terribly embarrassed by that and this is my confession. In college when we studied the Hudson River School I wondered where those guys were hanging out, they never painted Monticello or Woodbourne and I never saw them at Grossinger's. Today, I fully realized my ignorance: The 'borsht belt' that most folks consider the "Catskills" is not really the Catskills. The true Catskills are Slide, Cornell, Peekamoose, the Devil's Path, Katterskill Clove, and great views of the Hudson. The views of the Hudson and the surrounding valley, mountains, and clove from today's hike are among the best views I have ever seen on a day hike. The former grounds of Catskill Mountain House were inspiring. I felt like I was walking on hallowed ground. The signage on the site of the old hotel pays worthy homage to this former landmark. I added an extra mile to the end of the hike by circling the southern shores of the lakes back to my car. Then for the most exciting part of the day: I know it's not on the LP, but one cannot visit this area and not see Katterskill Falls, which are a stone's throw away. If they are not a wonder of the world, these Falls are one of the most impressive natural wonders in New York State and on this overcast April day I was lucky to have it almost all to myself.